The “City of Midas” occupies a vast plateau in Central Anatolia close to modern Afyon and Eskisehir. Strange rock formations shaped in ancient times into monumental rock facades and unexplainable stairways and tunnels create a sense of mystery as if dominated by some kind of supernatural power. This is a place of power, where one truly feels the pulse of the Earth in a place which has been since time immemorial the sacred centre of Anatolia. In modern times, the plateau of Midas has been called “Yazilikaya”, which means the “inscribed rocks” – a very appropriate name indeed –

The “City of Midas” is by no means a city in the classical sense. It is a city of the Gods and spirits, not the dwelling place of ordinary people.  There are no houses nor buildings whatsoever. Even though the “City of Midas” is often called a fortress, there is not even a strip of wall to justify such a claim.
Everything there is made of rock and cut into the living rock, as if the rock itself was home to some kind of divine beings. As in Peru’s famous Marcahuasi plateau, odd rock formations take the shape of monstrous beasts and human forms.

The most famous monument is the so called “Tomb of Midas”: even from a short inspection it is however clear it was never a tomb. The monument takes the shape of a giant rock-cut façade measuring over 16 meters in width and some 20 meters in height. There is a large portal in the façade, which however terminates in a false door which has been partly destroyed by robbers looking for some hidden treasures or chambers. This was most likely a doorway to the spirit world, bearing a close resemblance to other similar monuments in other parts of the world, most notably the famous Peruvian gateway of Aramu Muru close to lake Titicaca (which we also visited in 2007).
A large, yet undeciphered inscription occupies the top portion of the monument, where one clearly reads the name of Midas. It is not clear whether this Midas is the same as the legendary king of the Phrygians which is otherwise supposed to be buried in a large tumulus near Gordion. The inscription, in Phrygian alphabet, closely resembles the ancient Etruscan and runic writings.
The decoration of the façade is a very simple, yet strikingly beautiful geometric pattern made of crosses, triangles and squares. This is an extremely refined composition, which sharply contrasts with the otherwise crude character of Phrygian figurative rock sculpture.
There is also an unfinished monument, very similar to Midas’, located a few hundreds meters from the main monument on the same rock cliff.

When reaching the top of the “acropolis”, one finds the most unexplainable features of Midas. There are hundreds of meters of stairways cut into the rock and leading nowhere or deep into the Earth, giant stepped altars and thrones. These stairways were clearly intended as ceremonial pathways, and one can sometimes find the fainted remains of reliefs and depictions of pilgrims and robed figures carved into the rock in a very crude and archaic style which  is likely Hittite or pre-Hittite.

Some of these stairways end abruptly on the edge of a cliff, or simply lead nowhere stopping in front of inaccessible rock walls and crevasses. But there are also stairways leading to tunnels deep into the ground of the plateau: these tunnels are of extremely accurate workmanship and have a vaulted ceiling similar to Hittite gateways and tunnels one also finds in Bogazkoy-Hattusas.  In some cases these tunnels intersect at vast underground chambers which, though often called “cisterns” or “underground reservoirs” were surely never used as such. Unfortunately the extensive deposits which have accumulated on the bottom of the tunnels and chambers do not allow to find where they ultimately lead or whether they were intended to serve some other yet unknown purpose.
Turkey is a place of many underground cities, so I will not be surprised if the “City of the Gods” of Midas was in fact another underground city which could only be reached by way of these monumental dwindling tunnels. Phrygians believed their Gods lived deep beneath their mountains: perhaps Midas was held as the original homeland of the Phrygian people and of their national Goddess Cybele whose name literally means “Mother of the Mountain”.

Around Midas’ mysterious city extends the sacred heartland of the Phrygian empire, in the so called “Phrygian valley”: there hundreds of rock-cut chambers, tombs, altars and stairways create one of the most elaborate ceremonial landscapes in the ancient world. This was clearly intended as a sacred and ceremonial space, which was as such deliberately avoided by permanent human settlement.
In some places, like at Aslantaş and Yazilikaya-Midas itself, one has the feeling that some obscure, yet devastating cataclysm ravaged the entire region turning it into a kind of barren and lunar landscape. Giant crevasses opened into the ground, collapsed stairways and tunnels are all evidence of sudden destruction and impending catastrophe. In Aslantaş one wonders at the powerful force of nature that cracked the rocks and made a ruin of the giant rock cut monuments and sanctuaries…

The city of Midas is conventionally dated to the VIII to VII Century B.C., but it may be of any antiquity. The style is somehow reminiscent of pre-Hittite and bronze age construction, but there are also elements such as rock cuts and cup marks which are mostly found in Neolithic sites. Also, when one considers the level of erosion on the facades and the badly eroded rock formations one can only guess at the real age of this mysterious monument… 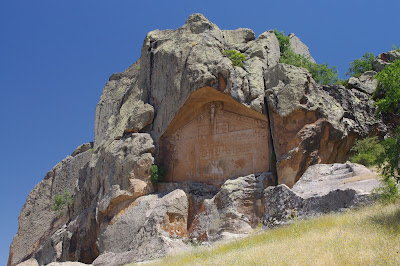 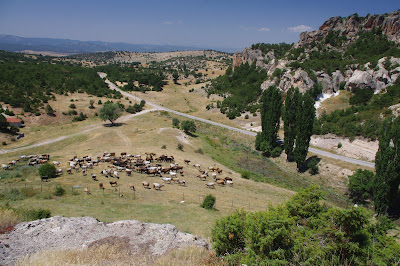 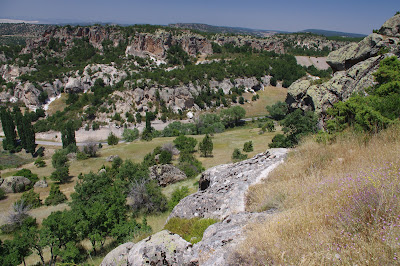 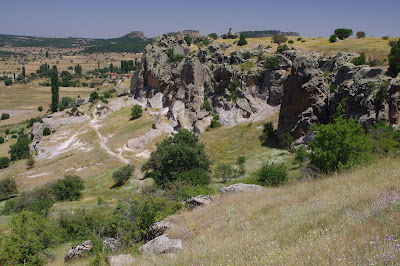 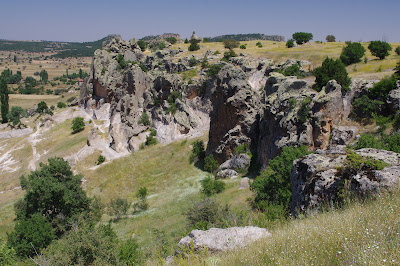 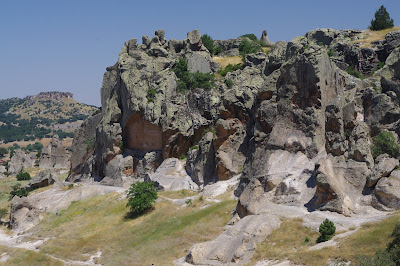 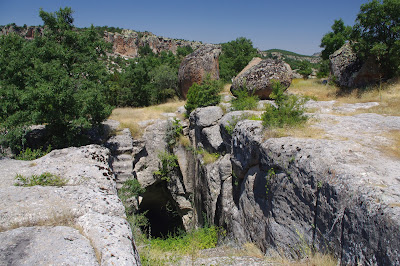 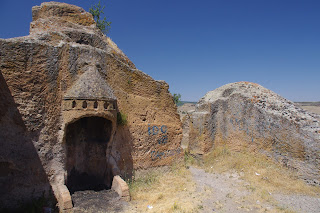