Harran of the Sabians

The ruins of Harran, which occupies the site of ancient Carrhae, are located some 40 Km South of the modern city of SanliUrfa, in South-Eastern Turkey. Amidst the vast crater of ruins, visible from many miles away, stands a high tower built of solid stone. This is all that remains of what was one of the major occult universities and mystery schools of the ancient world.

The name of Harran originally came from ancient Akkadian Harrānu, meaning “crossroad”
According to tradition, Harran was first founded by Nimrod, the legendary hero who was credited by Biblical scholars for building the tower of Babel. It was already a flourishing center by the 2nd millennium BC, famous throughout Mesopotamia and the Eastern world for its fabulous temple to the Moon-God Sin. King Nabonidos of Babylon, who was probably himself a native of Harran, turned the city into one of the major centers of his neo-Babylonian empire by the VII century BC, considerably enriching the great temple of Sin.

In classical times, Harran could benefit from a relative stability due to its cushion status between the Roman empire and Parthia. Harran proved however unfortunate to many Roman rulers: Crassus was defeated just in front of its walls in the plain of Carrhae, while Emperor Caracalla was there assassinated  while going on a pilgrimage to the grand temple of Sin. Another Roman Emperor, Julian, died in a military campaign against the Sassanians in 363 AD, soon after paying his respects to the planetary gods of Harran.
Even in the late IV and V Century Harran was largely immune from the diffusion of Christianity throughout the Eastern Roman empire and became one of the major strongholds of classical paganism. After the edict of Theodosius (389 AD) and Justinianus (529 AD) and the destruction of pagan temples which followed, Harran was taken as a safe refuge by various Gnostic and hermetic sects which had become persecuted in the rest of the empire.
According to 4th Century historian Libanius, “In the very middle of the city of Carrhae stood a magnificent temple, considered by many the equivalent to the Serapeum of Alexandria…In this temple was a very high tower, which was also used as an observation post because one could see the entire plain of Carrhae from its top… However, when the prefect Cinegius ordered the closure and destruction of all pagan temple in Syria and Egypt, this temple of Carrhae was also partially destroyed, and all of the idols and statues carried away.”
Notwithstanding the destruction and the sack suffered by hands of the prefect Cinegius, by the early 5th Century the temple had been already reconstructed and paganism re-established to the point that the pilgrim Egeria, writing also in the 5th Century, could not find a single Christian in the whole city of Harran (“sed totum gentes sunt…”).

The city was clearly established according to a Hermetic ground plan, closely resembling the ideal Hermetic city of Adocentyn whose description is contained in Picatrix. It too had seven gates dedicated to each of the planetary deities (Sun, Moon – considered equal to the planets – Mercury, Venus, Mars, Jupiter and Saturn) according to the principles of talismanic magic. It was circular in shape and had a large temple in its center surmounted by a high tower.
Not surprisingly, even after the rise of Islam and Arabic conquest, Harran became one of the major centers of Eastern and Western hermeticism. An important university was established in Harran as early as the 7th Century, where hermetic scholars were responsible for the re-collection and composition of the large, though widespread Corpus Hermeticum and of various hermetic treatises – most notably the Picatrix – dealing with talismanic and ceremonial magic.

According to a famous legend, when Caliph Al-Mamum took the city in year 820 AD, the Harranites claimed protection on the basis of being one of the “people of the Book” mentioned in the Quran. When asked who they were, they responded: “we are Sabians”, thus escaping massacre; and adopted thereafter the Corpus Hermeticum as their sacred text.
The name Sabians is likely a derivation from the Coptic Saba’ia, meaning “people of the Stars”, likely a reminiscence of a very ancient star cult which had its roots in the ancient Egyptian religion, the cult of the Magi of ancient Persia and the western Hermetic tradition. The linkage between the Sabians of Harran and Egypt was made even stronger by their annual pilgrimage to the pyramids of Giza, quoted by several Arabic writers, which the Sabians believed were the tombs of Hermes Trismegistus and Agathodaimon built before the Flood.
A famous phrase, written over the main entrance door to the largest temple of Harran could still be read by Arabic historian Mas’udi in 943 AD: “Know yourself, and you will become God”...

During the 8th Century, Harran briefly took over the role of capital of the Umayyad caliphate under Marwan II, which however lost in 762 when the capital was moved again to Baghdad by Abbasids caliphs.
Harran survived as a major center of learning and scholarship throughout the 12th and 13th Century, until it was finally sacked and destroyed by Mongolian hordes in 1259, never to be rebuilt.
It happened thus that what for over 3,000 years had been one of the most prosperous and important cities in the ancient near East became a deserted ruin.

One barely recognizes amidst the vast crater of ruins which is today’s Harran the wrecked grandeur and magnificence of the ancient city. The most recognizable remain is now the grand mosque occupying the site of what was in ancient times the temple of Sin with its high tower of stone visible from many miles away. The only other notable remains is a vast castle considerably enlarged by Saladin and the Crusaders to the South-East of Harran, whose octagonal towers are most likely all that remains of an ancient temple of the Sabians dedicated to the planetary deities. 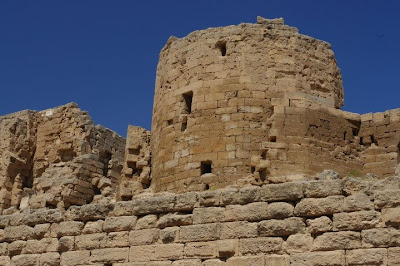 To add to the sense of mystery that sorrounds this city of the Dead, several authors have seen a connection between the tower of Harran and the Tower card – striken by bolts of lightning – in the Major Arcana of the Tarots. Another card of the Tarot, the Moon card also bears a close resemblance to a couple of nearby columns located in Sanliurfa and popularly indicated by the name of “Throne of Nimrod”, which were also closely associated to the worship of the Moon-god Sin (these are probably the same pillars mentioned by Jewish-Roman historian Josephus in the land of Siriad as the work of the sons of Seth from before the flood) 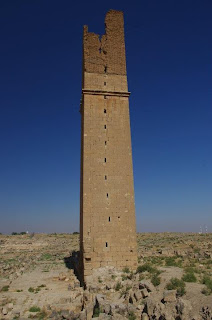 Harran - the great tower of the Astrologers overlooking the plain of Harran. Note the similarity with the Tarot card of the Tower struck by lightning...The tarot deck likely originated in the Islamic middle ages, and Harran was one of the major centers of learning and hermetic philosophy at the time - (photo by Author)