The ancient city of Arsameia, located on a high cliff overlooking the Nymphaios river, was the Summer capital of the Kingdom of Commagene (with Samosata functioning as the Winter capital). Little remains of the ancient city, except a few very ruined monumental stairways and architectural fragments of capitals and columns.  The most notable remain is a Hyerothesion, built as a symbolic tomb of King Mithridates Kallinikos and also containing reliefs of Antiochos of Commagene. The Hyerothesion consists of a rock-cut chamber which is accessed by means of a long stairway, also containing a rock inscription and a monumental relief of a Deixiosis of Mithridates (or Antiochus) shaking hands with Herakles.
Other notable reliefs include a broken  Deixiosis of Mithridates and Mithra-Helios.

The Roman bridge on the Cendere gorge, located a short distance from Arsameia, is one of the most celebrated feats of Roman engineering.  It was built by soldiers of the Legio XVI Flavia Firma during the reign of Emperor Septimius Severus about 212 AD. It is 150 meters long,  consisting of 3 arcades. The 4 columns placed in pairs on each side of the bridge (only 3 remain) were built in honor of emperor Septimius Severus, his wife Iulia Domna, and his sons Caracalla and Geta. Geta’s column was later removed after his assassination by his brother Caracalla.

The castle of Yeni Kale (New castle) was the most likely location of the royal palace of the Kingdom of Commagene. Located a mere 5 Km from Arsameia, the site hosts an impressive medieval castle, whose foundations date to the bronze age and the kingdom of Commagene. The castle is now undergoing extensive restoration, but is still an impressive sight perched as it is on a steep mountain top.

The castle of Derik is not a real castle, but rather a monumental temple complex dating to the kingdom of Commagene and the Roman era. To get there one takes a small dwindling road to the right of the Cendere bridge, along a spectacular gorge. From there, it is a 8 Km road up to Derik Kale: as the ancient site is not signposted, one needs to ask locals about directions to get there (37.970827 N,38.619754 E approximate location).
On a high plateau, one finds the remains of at least two temples and a vast temenos (that is, a sacred precint). The temples, which have both collapsed, were in the Corinthian style, as may be guessed from the many column shafts and capitals lying on the ground. The massive temenos wall also contains towers and a small vaulted chapel which was probably a heroon, that is a hero’s tomb, or a local landlord’s mausoleum.
Derik Kale, which does not seem to receive many visitors nowadays, was once the most important national sanctuary of the kingdom of Commagene.

The tumulus of Karakus (or Eagle’s tumulus) is a large burial mound built by King Antiochus of Commagene for his wife and sister and his mother Isias.  Four pairs of columns – each at least 10 meters high – once stood at each compass point around the tumulus, surmounted by statues of an eagle, a lion, a bull and a Deixiosis of Antiochus (or Mithridates) shaking hands with Herakles. From Karakus tumulus, which is located some 20 Km after the Cendere Bridge in direction Adyiaman, one has a clear sight of Nemrut Dag some 50 or 60 Km away. 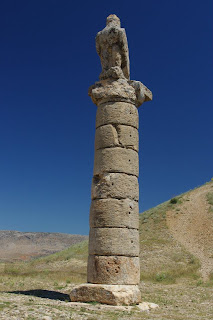 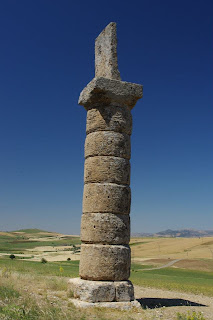 The ancient city of Perrin

Perrin (Perre) was one of the 5 cities of the kingdom of Commagene. Its ruins are located in the immediate outskirts of Adiyaman town, next to a rocky outcrop. The most significant remain of the ancient city is the large necropolis, which consists of many hundreds rock-cut tombs mostly dating to the late Roman and early Byzantine period (IV to VI Century AD).
Tombs are mostly undecorated, however, the interiors are very well preserved and one can still see the funerary beds. Close to the necropolis there is also an underground water source, which is reached by a flight of steps dating to the Roman period.
Almost nothing remains of the city itself, which likely occupied the site of today’s Adiyaman. 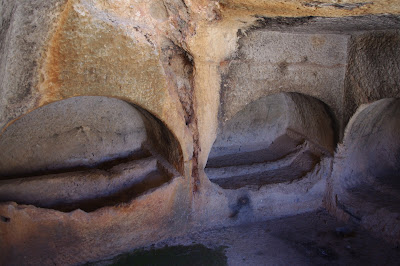 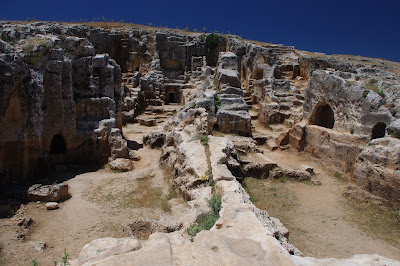 The Sofraz tumulus was a real surprise. One gets there almost by chance after a long road from Adiyaman (the ancient tumulus is not signposted), after visiting Karakus tumulus, some 15 Km to the East of Besni (37.669036 N ,37.93298 E approximate location).  The tumulus sits amidst a lush farmland and probably receives less than a few visitors a year (not surprisingly, given the very bad state of the road leading there). Yet there is a guardian on the site, who for a reasonable tip will open the tumulus for you and give you a torch to visit the interior (this is one of the very few tumuli, particularly in the East, which possess an accessible burial chamber).
After descending a pit through a wooden stairway, one finds an entrance marked by an arched doorway providing access to a long corridor. After a few meters, the corridor opens into an ante-chamber with barrel vault, very finely built with dressed stone. Finally, one enters the burial chamber, which also has a barrel vault lined with fine, polished limestone. Inside the chamber, one still finds two sarcophagi still in their original position and retaining their cover, both undecorated but of excellent workmanship.
This ancient tomb, which has been undisturbed for the last 2,000 years, still retains the freshness of the white limestone and the sharp edges of the stone as the day it was constructed. 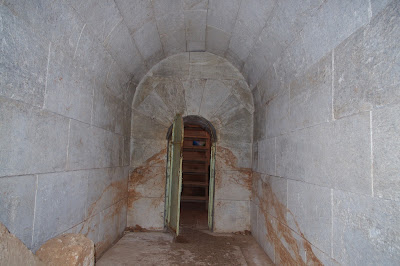 This was probably the most difficult site to be found in the province of Adiyaman. To get there, one needs to continue from the town of Besni on the same windling road leading to the Sofraz Tumulus for some other 30 Km.
The ancient Roman bridge, which, although in a more ruined state, appears to be of more massive and elegant construction than the Cendere bridge, connects the opposite sides of a gorge of the river Göksu (which, we suppose, is the same as the Calycadnus entering the Mediterranean sea near Silifke).
It is entirely impossible to locate the bridge by yourself without some aid from locals. Coordinates for the bridge are 37.44615 N, 38.163146 E, close to the village of Kizilin. You should go to Kizilin first, and then ask for some locals to accompany you to the bridge (make sure they know what you are looking for, as it seems that not even most of the locals know about the bridge whereabouts). It is a 6-7 Km ride on dirt roads until a ruined water station. There the road ends abruptly into the river (however, from this vantage point you can hopefully see the bridge in the distance). You need to leave your car there and cross the river on foot (water is not very deep, but beware of the strong river currents – around mid June it was quite easy to cross, with only about 1 meter water at its deepest point). After some 15 minutes walking along the river bed, you finally reach the bridge, which has partly collapsed, at the beginning of a high gorge.
The bridge still retains its original balustrade and has 2 out of 3 arches still intact. It seems that even the central arch stood intact as late as the early 20th Century, when it was apparently bombed as a consequence of some border dispute.
The bridge is 84,4 meters long and 7,80 meters wide, with a long ramp on its left side. The central arch, now collapsed, covered a span of over 31 meters. The bridge was probably built by the same Legio XVI Flavia Firma headquartered in Samosata, which was also responsible for the construction of the Cendere bridge about 200 AD.
During the Islamic period, the bridge was regarded as one of the wonders of the Eastern world, together with the Lighthouse of Alexandria, the Mosque of Damascus and the Church of Edessa.
There are also many rock-cut tombs close to the bridge. 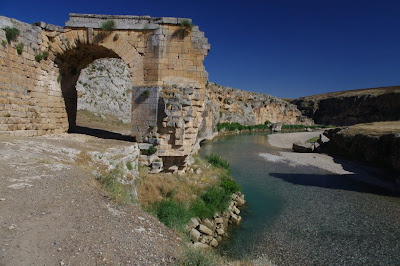 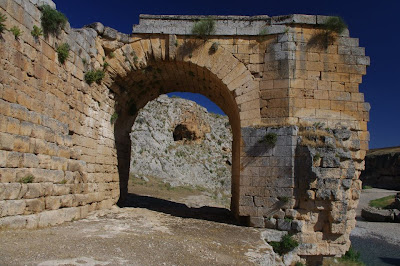