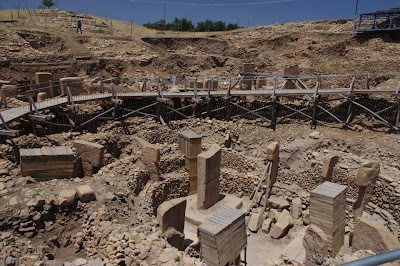 Gobekli Tepe is a site that needs little presentation, so large was the media coverage over the past few years. There is no doubt Gobekli Tepe started an archaeological revolution of immense proportion, and its finding will possibly mark one of the greatest archaeological discoveries of the Century

Last June, I decided to visit the site for myself, before it will be eventually turned in a major tourist attraction for the region.

Gobekli Tepe, whose name means "Navel" or "Potbelly hill" is actually a large rocky outcrop covered by a mound some 20 Km North-East of Sanliurfa, in Eastern Turkey.
The ancient site is surprisingly well signposted along the way (unlike many other ancient sites in Eastern Turkey), so that it is quite easy to locate when driving from Sanliurfa to Mardin.
Upon arrival, one is greeted by a fence and a security check-point: there is no ticket office, no souvenir shops - nothing at all - It has the real look and feel of a true archaeological dig.

Some scaffolding has been built to allow walking through the main excavation area, while some of the most recent excavations have been fenced over with barbed wire.

And there it is: tens of giant megaliths and standing stones placed in circles of diminishing diameter around a central room supported by pillars: I must admit I was surprised by the sheer size and complexity of design of the carvings and the T-shaped pillars. Pictures do not make justice to the real monumentality of Gobekli Tepe: some of the largest pillars are as high as a two-story building (7 meters, about 22 feet), still standing intact after thousands of years.

And here is the mystery of Gobekli Tepe: who built it and why?

The site of Gobekli Tepe was first described in 1964, when a large number of flints and half-buried limestone slabs were discovered as part of a joint survey by the University of Istanbul and the University of Chicago.
Still - believe it or not - the site was soon dismissed as a byzantine cemetery and the upright stones declared byzantine grave markers (that is, V to VII century AD) of little, if no archaeological value.
The site fell again into oblivion until a Kurdish shephard accidentally struck into a large upright stone while ploughing his field.
This "re-discovery" could have easily fallen again into oblivion, were it not for a German archaeologist looking for evidence of neolithic sites around Sanliurfa. The archaeologist's name was Klaus Schmidt, and he immediately recognized the similarity between the T-shaped pillars unearthed at Gobekli Tepe and some very similar stones that were found at the nearby site of Nevali Cori (now flooded by the Ataturk dam).

As more of the strange T-shaped pillars were unearthed, a number of highly sophisticated carvings were revealed; these included lions, foxes, vultures and various species of birds. The carvings, some of which resembling hieroglyphics or abstract symbols of sort, were so skilfully executed that - at first - a bronze age dating was proposed (III to II millennium BC). However, Gobekli Tepe would soon defy even this interpretation.

"The oldest man-made structure on Earth"

As the first radiocarbon dates for Gobekli Tepe came out, it soon became clear it was neither a byzantine cemetery nor a bronze-age cultual complex. News came as a shock: The site, with its massive stone pillars and the beautiful carvings was at least 11,500 years old - that is, 7,000 years older than the step-pyramid of Egypt or Stonehenge. It was not a bronze-age construction, but an early neolithic or epipaleolithic sanctuary. This also made it the oldest man-made structure discovered on Earth and the earliest attempt at monumental architecture ever.
And what an attempt! Archaeologists now estimate that some 250 to 300 stone pillars, weighing as much as 40 tons were carved from local sandstone and accurately fitted into circles of varying diameter, some as much as 30 meters wide.
So far, only 4 circles have been revealed. However, archaeologists estimate an additional 16 circles or more may still lie buried under the nearby mounds.

Many of the pillars are decorated with carved relief of animals and enigmatic abstract pictograms. The huge variety of wildlife depicted - has been suggested - may also include animal species from distant areas, such as lions, gazelles, bulls, boars, foxes, snakes and other reptiles, arachnids, insects and various species of birds - particularly vultures. There is also a high relief of a lion with gnarling teeths.

Some of the largest stones, which were possibly used as pillars to sustain some kind of roof, are also antropomorphized to portray priests or tribal leaders wearing fox skins and a large belt.
According to some recent interpretations, Gobekli Tepe was actually a place for burial and honoring the spirits of the dead. Indeed, some of the figured reliefs may show decapitated corpses sorrounded by vultures, thus establishing a link with the afterlife.

At the time of its construction, Gobekli Tepe was clearly a major shrine for the entire region, though the exact nature of the cults and rites performed will probably never be fully known.

For some yet obscure reasons, after only a few centuries of intense building activity on the site, Gobekli Tepe was suddenly abandoned around the VIII millennium BC. What is perhaps most mysterious is that the whole site appears to have been deliberately buried at this time under a huge mound of dirt and gravel, so as to apparently preserve it for future generations while hiding it from sight completely.

Many questions remain on the identity of the unknown builders of Gobekli Tepe. Were they just hunter-gatherers or did they already perform some form of agriculture? How could such an astonishing feat of engineering as raising almost 300 stone pillars - some of which as heavy as 40 tons - be accomplished by sparse tribes lacking any kind of sophisticated tools?

Until excavation at Gobekli Tepe began, a complex of this scale was not thought possible for a community so ancient and with such primitive quarrying tools as flint stones and cutters.
Also, the labor force required would be in the order of hundreds - perhaps thousands of people - hardly a population that could survive on a simple hunting and gathering economy.
Also, where did they come from and whence did they get the social organization and the engineering and architectural skills required to build such a massive complex for which nothing even closely similar would be built for the next 7,000 years?

This is the great mystery of Gobekli Tepe and perhaps of the whole prehistoric world...

Gobekli Tepe - slideshow on Flickr (All photos by Author)
Posted by Marco M. Vigato at 4:32 AM