When entering Tikal, one really has the feeling and the sensation of entering a lost world. It is an experience like any other: unlike other Meso-American sites - such as Chichen Itza or Teotihuacan, sitting in a plain amidst low vegetation - the ruins of Tik'al are only slowly revealed by the forest. Giant trees rising as high as 50 meters hide everything from sight but the tallest pyramids...

There are thousands of ancient structures at Tik'al, only a handful of which have been excavated

One first approaches the ancient site at the Grand Plaza, a masterpiece of architectural balance and ceremonial architecture. Here one finds, on the opposite sides of the square, the twin facing temples of the "Great jaguar" (Temple I) and of the "Masks" (Temple II).

Rising a lofty 47 meters high (150 feet) above the jungle canopy, the temple of the Great Jaguar is one of the most iconic ancient structures in Tikal, though it is not even close to the largest ones. The temple was built as a funerary pyramid dedicated to King Jasaw Chan K'awil in 734 AD. The temple derived its name from a curious bas-relief on its roof-comb depicting a giant enthroned king supported by Jaguars, though little of the original decoration survives.

Compared to temple I, the "Temple of the Masks" is a more massive construction, standing 38 metres (120 feet) high. The temple was also intended as a monumental tomb to the wife of King Jasaw Chan K'awil, although no burial chamber has been found as of today.

On one of the long sides of the square stands the North Acropolis, an imposing complex of buildings on superimposed terraces facing the Grand Plaza. Its original facade stood 33 meters (110 feet) high, consisting of three stepped pyramids with monumental stairways giving access to the upper acropolis. The North Acropolis was found to contain the burials of several Kings of Tik'al, namely Siyaj Chan K'awil (known as burial 48), Siyaj Chan K'awil II and his father Yax Nun Ayiin (both under pyramid 34). Also, an unidentified ruler was buried in Temple 33 (burial 23).

A great many stelae, both blank and sculptured with the effiges of the rulers and kings of Tik'al, stand on a terrace in front of the North Acropolis. Excavations under the North Acropolis have revealed an earlier stage of construction dating to the early pre-classic period.

The side of the square opposite to the North Acropolis is enclosed by a rather articulated complex of buildings, consisting of a ball court, some smaller pyramids and a large palace known as "Palacio de los cinco Pisos" - The palace with 5 floors -
The palace itself comprises several buildings and shrines around a central courtyard. It was likely a palace of the ruling class of Tik'al, as may be suggested by the giant masks sculptured on its facade - an effigy of royal power -
The palace still retains much of its original corbel vaults and stuccoed walls, from which one has a majestic view over distant temple V emerging from the jungle canopy.


A few hundred meters from the Grand Plaza, one is suddenly struck by the giant roof comb of temple III rising 55 meters above the jungle canopy. This is the only visible and clearly recognizable element of this once massive pyramid, the last monumental construction to be built in Tik'al around AD 810. Temple III, also called the "Temple of the Jaguar Priest", derives its name from a relief - now badly damaged - once decorating its roof comb and depicting a dancing priest (possibly the ruler "Dark Sun") covered in a jaguar skin.
The rest of the pyramid, including its imposing stairway, is still covered in dirt and thick vegetation, making an excellent image of how the site would have looked like before excavation and restoration works on much of the largest structures took place.


After some walking, past Temple III and the "Palace of the Bats", one finally reaches Temple IV, the tallest structure ever built in Tik'al and one of the tallest in the Maya world. Rising 70 meters (210 feet) from floor to top, temple IV was built during the reign of King Yik'in Chan K'awil, son of Jasaw Chan K'awil, builder of the Temple of the Great Jaguar.
The base of temple IV, also called "Temple of the double-headed Serpent", is still covered by vegetation, and one only reaches the top through a very steep wooden stairway placed on one side of the pyramid. Climbing to the top, even under the intense heat and humidity, is a highly rewarding experience since from the top of Temple IV one has possibly the best and clearest view over all of Tik'al. 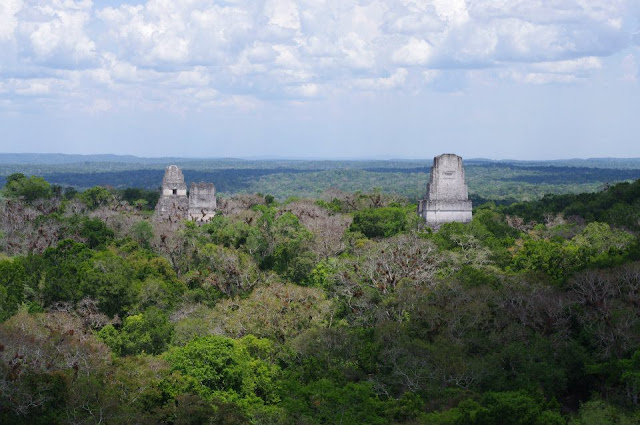 The "Lost World" complex contains some of the oldest and most impressive structures at Tik'al. Its architecture differs entirely from the rest of the site, and is clearly based on Teotihuacan models.
The "Lost World" pyramid, standing at the center of the complex, has a square basis with four stairways - one on each side - leading up to the top. Also, the angle of this pyramid is far less steeper than those of the later pyramids and closely mirrors that of the Pyramids of the Sun and Moon at Teotihuacan.
The massive facade has typical Teotihuacan talud-tablero pattern, and was once decorated by giant masks which are now badly eroded and barely recognizable. Another large pyramid, also built as a stepped construction, stands not far from the "Lost World" pyramid. 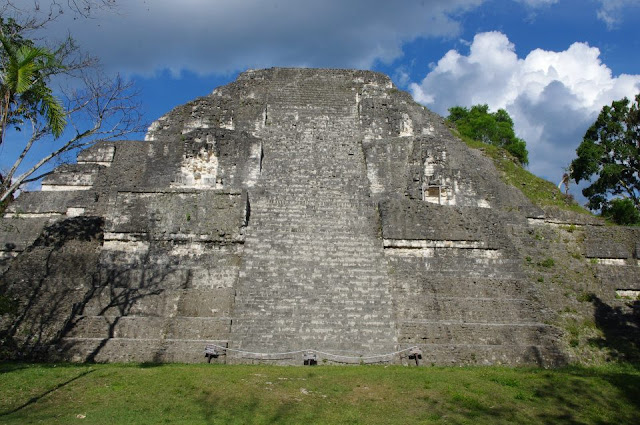 The "Plaza of the Seven Temples"

This large plaza, located just a few meters from the "Lost World" complex, was a vast ceremonial space comprising several ballcourts, pyramids and a large palace. The plaza derives its name from the seven small shrines places on one of its long sides, which has been suggested were dedicated to the Pleiades gods.
The most interesting feature are the magnificent interlocking chambers of the palace built on the short side of the square, which still exhibit much of the original lintels and stuccoed walls.

Temple V is also one of the largest structures in Tik'al, standing 58 meters (190 feet) high and still partly covered by vegetation. Seen from the bottom of its stairway, the temple looks even more imposing, with its large stairway and massive roof comb.

Temple VI, also called the "Temple of the inscriptions" is notable for the long hieroglyphic inscription covering the back and sides of its roof top. The roof top comb alone reaches an height of 12 meters (39 feet) and was dedicated, together with the underlying temple, in AD 766. The temple also faces onto a plaza with several monumental stelae which have not yet been restored.
This temple is located in a remote part of the site, and it is an almost 45 minutes walk from the Grand Plaza, so be sure to bring water if you attempt to visit this temple in the midday heat.

On the way back from Temple VI, heading towards the Grand Plaza, it is worth to stop at an interesting complex of buildings covered by thick jungle and called "Palacio de las Escanaladuras". This is a large palace joined to a still unexcavated pyramid complex. It is most notable for the parallel grooves decorating its facade and the many tunnels and passageways one finds in the interior.
The "Palace of the Bats" is located not far away, and also exhibits a massive facade with several doors and windows.
To the far North of the site, one finds the "Northern Complex" and the "Twin pyramids complex". There are actually several twin pyramid complexes, however, only one has been restored. Each twin pyramid complex was built to celebrate a cycle of 52 years in a sort of royal jubilee, and was thereafter abandoned in order for a new complex to be built at the beginning of the new cycle. There are several blank stelae in front of the best preserved pyramid, and a few decorated ones in the small shrines built on its sides.

For a truly memorable experience, do not forget watching at the Sunset and moon rise from the summit of Temple IV. During our visit in May, we were lucky enough to witness a rare "super-Moon" rising amidst the pyramids. On the way back from Temple IV, sitting on the back of an old pick-up, one could really feel the magick of the place as if wandering through a city of ghosts dimly lit by the moon light. Absolutely Not to be missed...