A mysterious Olmec presence in the Mixteca

Huehuepiaxtla is a small town located in the heart of the Mixteca region, 150 kilometers (100 miles) south of Puebla. Overlooking the town is a huge isolated peak, called by locals ‘La Peña’ – The rock. Tradition has it that the mountain was home to the first inhabitants of the region, who were later turned into stone by the gods.
I first became interested in this mysterious site after coming across pictures online of what appeared to be several broken stelas and bas-reliefs [1]. There were also rumors of more extensive ruins near one of the peaks, including great stone walls and a broken obelisk. After contacting the local authorities, the municipal president Dr. Florencio Domínguez was kind enough to arrange for a guide and equipment to climb the peak and document whatever ruins we might find on top.

Upon arriving in Huehuepiaxtla, the summit of the Peña was still entirely shrouded in the morning mist. After the necessary preparations, we approached the cliff from the West. The peak now loomed directly a full 450 meters (1,470 ft) above us and the Rio Mixteco running below. Luckily, no rain had fallen in the past few days, so the rock was quite dry. Florencio explained that had it rained the night or the day before, the rock would have been too slippery to climb. Our guide, German, was an expert climber and one of very few people in town who know the difficult trail to the top.
Already at 10:00 am the temperature was nearly 30°C. Near the base of the cliff, we walked through a large flat area, trapezoidal in shape, which appeared to have been artificially leveled with steep embankments on all sides. Some overgrown mounds on the western side suggested this might have been a ceremonial plaza flanked by pyramids.

The possibility of a connection between these sites is further suggested by the fact that a line drawn through Chimalacatlán and Huaxtla (as described in a previous article [2]) leads directly to the rock of Huehuepiaxtla. A continuation of the same line crosses the nearby rock of Tlaxcuapan and ends at Apoala. This alignment of five sites, all displaying unusual megalithic architecture, appears to be hardly coincidental.
It is only to be hoped that the Mexican Institute of History and Anthropology (INAH) also gathers an interest in this now forgotten site and helps preserve it from looting for the benefit of future generations.
References

Unfortunately, no bibliography could be found concerning Huehuepiaxtla and its ruins, as the site is presently unpublished and no mention of it exists in academic literature.

Also on this blog: The Location of the Mesoamerican ‘Hall of Records’ at Chalcatzingo: http://unchartedruins.blogspot.com/2016/11/the-location-of-mesoamerican-hall-of.html - Note the striking similarity between the profile of the rock of Chalcatzingo and the Peña of Huehuepiaxtla, as if to suggest that these may have in fact been sister sites belonging to the same culture
Posted by Marco M. Vigato at 7:15 PM 2 comments: 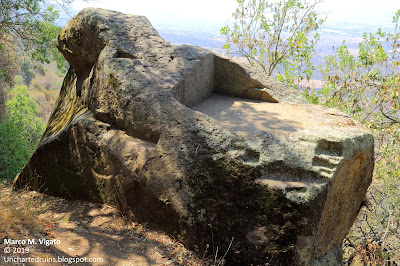