Irem of a thousand columns 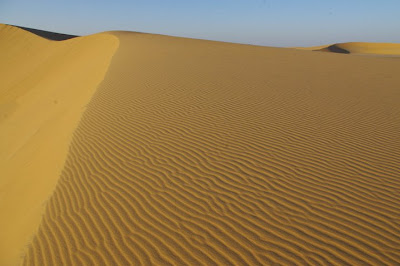 Irem of a thousand pillars (Iram ḏāt al-`imād in Arabic), a city the like of which has never been built in the whole Land (according to the Q’uran) is a lost city shrouded in mystery. According to Islamic lore, King Shaddad, the son of Ad, had the city built as an imitation of Paradise on Earth to compete with God, and received for this heavenly chastise.
In some versions of the myth, Shaddad and his tribe of giants (or according to some other legends, with the help of a legion of demons (Jinns) built Irem before the time of Adam, thus making it the oldest city on Earth.

The exact location of Irem is somewhere lost in the Empty Quarter, the desert of Rub al Khali of Southern Arabia, where only by chance can Irem be found by the uninitiated.
Irem also plays an important role in the Necronomicon Mythos.  The fabulous author of the “Al Azif”, the mad poet of Sana’a Abdul Alhazred was credited by Lovecraft for visiting Irem and penetrating its hidden vaults:

“Irem Zhat al Imad, Irem of the Pillars, the great city. I have spent ten years in the heart of the "Roba al Khaliyeh," the empty space, the great southern desert colored "Dahma," crimson. And I have seen the fabulous many pillars of Irem and I have been called "majnun," mad and possessed of the Jinn. Many are the strange and unbelievable marvels that may be seen there. Alas for the earth has swallowed up the City of Pillars, no more do the caravans of frankincense pass by. Many have called it a town of great wickedness, but do they dare comprehend the fabulous?
Irem was an earthly paradise to the initiated. Towers rising high, the great octagonal fort, alas no more! And there were places here of hidden knowledge and of power.
Some say it was built by giants, some by the tribe of Ad, but Irem was here before men and though swallowed she will protect her secrets from the profane, releasing them to the knowing
For there are many levels of existence for Irem, many levels of reality. So Irem of the Old Ones still exists in some form, and is not this great desert, this empty quarter connected to the void.? Cannot a Muqarribun interact with its unseen denizens in the Crimson Desert?” [1]

The tribe of Ad mentioned in the Q’uran bears a close resemblance to the Biblical Nephilim, which were also believed to be a race of giants and credited for building the City of Enoch. In some other traditions it was Cain, the murderer of his brother Abel to found the great city (Genesis, 4,17) which is somehow identified with Baalbek (Heliopolis) in what is today’s Lebanon.
In one of the earliest Arabic accounts of Irem, quoted by Mas’udi in “The Meadows of Gold”, an other striking identification of Irem is proposed with the city of Damascus in Syria:

“Such was the reign of Djeiroun, the son of Saad, the son of Ad, who first settled in the Country of Damas, where he had his capital. There he gathered a great many pillars of marble, white and coloured and had a considerable construction built which gave the name of  Iram of Pillars...Many historians give different opinions on the account of Irem and its location, but I believe that to this day, in the year 332 of Egira, its ruins survive in what is now one of the markets of Damas, close to the door of the Mosque-cathedral called Djeiroun or Gate of Djeiroun.” [2]

Another interesting reference to Irem in the work of Mas’udi appears in the chapter describing the foundation of Alexandria by Alexander the Great. According to Mas’udi, when Alexander reached the site of what was to become the capital of his new empire, he found the place marked by a great many ruins in the middle of which stood a column of stupendous size bearing an ancient inscription “in Mosned characters, that is to say, in the ancient writing of Himyar and the kings of Ad”. The inscription read:

“I Shaddad, son of Ad, son of Shaddad son of Ad, whose arms have embraced the Earth, I had large columns cut from the mountains and quarries, I built Irem of pillars, a city the like of which was never seen, and after that, I decided to build a city similar to Irem where I gathered all the noblest and fairest of men, the very best of all nations and tribes, because this place was protected by Fate from all disasters and calamities which befell the Earth. But in this grand endeavor I was stopped and thus was my project abandoned […] It was not in front of a mighty king or his innumerable legions that I surrendered, but to Death only because the end of my days had come by the mercy of God”

Again, according to Mas’udi the sons of Ad (also called Adytes) were the first to rule over the Land:

“The great empire of the Adytes was the first to be ever founded on Earth, after that the vengeance of God had exterminated all the infidels by means of the great Flood of Noah” [3]

The Adytes were, as we said, a race of giants endowed with an unnaturally long life which was proportionate to their height. The ancestral territory of Ad was, according to Mas’udi, bordering Yemen and comprising the land of Sohar (Oman) until the Hadramut. Shaddad, son of Ad, travelled the World, waged war against India and the West and built Irem of pillars in a time before the dispersion of people and languages which followed the episode of the tower of Babel.

The idea of a mythical city of inexhaustible riches and ruined splendors somehow lost amidst the sands also caught the imagination of the author of the Arabian Nights (or the Book of the One thousand and One nights), which situates Irem in the deserts of Yemen. According to the story told in the Arabian Nights of the fate of many-columned Irem, the city was built by King Shaddad as an imitation of the Earthly paradise and was truly the most splendid and magnificent city ever seen on Earth.

According to legend, it took 20 years to gather the gold, silver and the precious stones necessary for the construction, and another 30 just to complete the walls. Other 20 years were spent for building all the great palaces and temples and a further 20 years to complete the preparations, furnishing and decorations. When eventually Shaddad was about to enter his new splendid capital with all his retinue, God sent a sand storm (or a thunderstorm, according to other versions), so violent that of this King and all of his tribe was never heard again a single word. It is said, however, that this city still exists in the solitudes of Arabia…
Curiously enough, a city (or Land) by the name of Irem is indeed mentioned in ancient writings, most notably in clay tablets found at the ancient library of Ebla and in Egyptian texts dating to the reign of Sethi I.  It is not clear whether the Egyptian Irem appearing in some New Kingdom texts was one and the same with the Old Kingdom Land of Yam. There are several hypotheses concerning the location of the Egyptian Irem, the most likely being the Upper Nubian valley. There is however research suggesting that Irem may have been a much more distant land, possibly located in what is today Ethiopia/ Eritrea (which was for a period subject to South-Arabian rule from the Yemenite kingdom of M’arib, or Sheba). Still, it is doubtful whether the Egyptian Irem was the same as the many-columned Irem of Arabian legends and mysticism. [4]

Also, one clay tablet found in the library of Ebla, dating to 2,300 BC mentioned diplomatic and commercial intercourse with the people of “Iram”, even though also in this case the indentification with Irem is doubtful.
In the early 1980s, researchers looking for ancient settlements along the frankincense route in Southern Arabia found a promising location close to a water well called Ash Shishar, in a site which had been previously identified as a 16th Century fort. The expedition team included adventurer Ranulph Fiennes, archaeologist Juris Zarins, filmmaker Nicholas Clapp and lawyer George Hedges. The team scouted the area on several trips, uncovering remains of an earlier settlement which they believed could have served as an outpost on a trade route to Irem. About 300-500 AD the fort collapsed probably because of a cave-in of the underground water source which had assured its survival in the harsh desert climate for many centuries. Later, the site came to be identified with Ubar, mentioned by Ptolemy in his Geography. There is however no proof that the site was never more than an isolated water hole guarded by a relatively small fort [5]. There is even doubt this remote outpost could be the same as the trading post called Omanum Emporium in Ptolemy’s Geography and believed to be one of the most important stations for the production of Oliban or frankincense.

As of today, no further clue has been found as to the location of Irem, which has thus come to be designated as the real “Atlantis of the Sands”

According to esoteric tradition and some currents of Islamic Sufism, Irem existed in this world as well as on separate levels of existence [6]. In this case, Irem is the gateway to the Void (symbolized in the myth by the Rub al Khali – the empty quarter), that is, to annihilation of the self as a fundamental step towards initiation which can only be entered while in an alterate state of consciousness. To the Muqarribun, Rub-al-Khali is thus the secret door to the Void in Arab magickal traditions and the exact Arab equivalent to DAATH in the Qabalah.
Also, another possible translation for “Irem of pillars” is “Irem of the old ones”, which is remarkably similar to Lovecraft’s “Old ones” who are supposed to cross the Void to take again possession of the Earth. Was Lovecraft somehow aware of ancient Arabic magickal traditions?