Tik'al - The lost City of the Maya

Tik’al may not be so much off the beaten track. Still it receives surprisingly less visitors than the majority of Maya and pre-columbian sites across Mexico and Yucatan. Arguably, Tik’al possesses some of the most impressive and iconic Maya architecture in Meso-America.
Accounts of a fabled city of stone somehow lost in the jungle of Petén began circulating in the early XVII century. However, it was not until 1848 that the site was formally discovered by an expedition led by Modesto Mendez and Ambrosio Tut. The site was extensively studied and excavated, amongst others, by Alfred P. Maudslay and Sylvanus Morley. Excavations on the site are still ongoing  mostly supported by the University of Pennsylvania.
Covering 222 square miles of thick jungle and with 13 square miles of structures already unearthed, Tik’al is the largest excavated site in all of Pre-columbian America. Still, this is but a tiny portion of the whole site.

We arrived in Tik’al on the early morning of a sunny day in early May. Our flight from Guatemala City to Flores – some 70 Km away from the ancient site – had been somehow delayed because of the morning mist covering the mountain tops.

The road running from Flores to Tik'al runs through pristine forest along the shores of lake Petén Itza, one of the largest in Guatemala, until the gate to the national park. The site did not seem to receive many visitors this time of the year, so we could have whole areas of the site entirely for ourselves.

At the entrance of the park, one is greeted by a giant scale-model of the ancient site, complete with pyramids, causeways and reproductions of buildings. One can not but wonder at the complexity and overall grandeur of the ancient layout. When looking at it, one immediately realizes that one day is not enough to see all of Tik’al, especially if you don’t want to miss also the minor ruins and pyramids that dot the landscape. My suggestion is you stay at the Jungle lodge Hotel, which offers some comfortable accommodation just inside the archaeological site (which is especially good for those who wish to watch at the sunrise or sunset from Temple IV – also keep in mind that after 3 pm the site is almost deserted, with nearly no tourists around, while most tours running from Flores usually end in the early afternoon).

Not much is known of the early history of Tik’al before the pre-classic period of Maya civilization. The earliest findings on the site date from the 6th and 4th century B.C. However, Tikal did not reach its peak until the Classic period, extending from 200 to 850 AD. The population of Tik’al is estimated at 100,000 at its height, making it one of the largest cities of Maya civilization (together with neighboring El Mirador).

Tik’al had strong ties and relationships with most sites in Meso-America, as far as Teotihuacan in distant Mexico. For some time, Tik’al even came under Teotihuacan’s rule, which happened around 378 AD during the rule of King Siyah K’Ak (Fire is Born) who “came from the West” as reported in inscriptions portraying the King with the typical Teotihuacan armor and headdress.

After the period of Teotihuacan rule, an alliance of Maya states including Caracol and Calakmul fighted and eventually defeated Tikal in the mid 6th Century AD. This coincided with a near complete stop of all building activity at the site and a lapse in the writing of inscriptions lasting for all of the 6th and 7th Century (known as the Tik’al hiatus). During the 9th Century, construction work started again on Temple III, the last monumental construction to be built in Tik’al. However, by 950 AD Tik’al seems to have suffered a rapid collapse, with the majority of the city already deserted. The last inhabitants abandoned the ruins around the 10th or 11th century, with the rainforest claiming all that was left of the ancient city. One can not but wonder at the mystery of a once thriving city, with all its magnificent temples, majestic palaces and pyramids, suddenly abandoned and left to the jungle.

For almost one thousand years, Jaguars and monkeys would be the only inhabitants of this city of the dead.

[To be continued in Part 2] 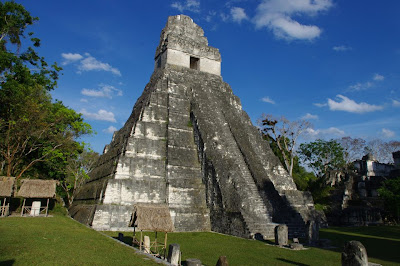 Tik'al, Guatemala - The temple of the Great Jaguar (Temple I) on the great plaza of Tik'al - arguably one of the most iconic Maya architectures in Meso-America (Photo by Author)
Posted by Marco M. Vigato at 11:32 AM