The lost Kingdom of Commagene 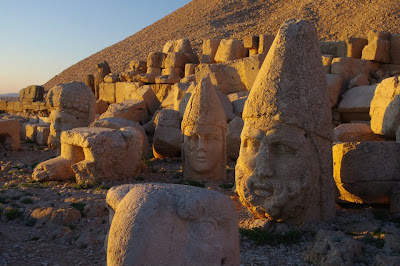 The ancient kingdom of Commagene was a small mountain kingdom located in what was Asia Minor, in Eastern Anatolia, as a cushion state between the Roman Empire, Armenia and Parthia.
Commagene conquered independence from Armenia in 163 BC and survived as an independent kingdom until 72 AD when it was annexed to the Roman province of Syria.

Leveraging on their cushion status between the Roman West and the Persian East, the kings of Commagene attempted a religious reformation whose ultimate purpose was to merge the Western pagan religion with Eastern Mithraism and Persian astrology (an attempt which had a great influence on the early Christian communities as well).

Even though almost nothing remains of the ancient cities of Commagene (The capital of Commagene, Samosata, was recently submerged by the rising waters of the Ataturk dam), a number of interesting and quite unique monuments testify to this once great kingdom and its attempt to religious reformation.

Mount Nemrut: the throne of the Gods

The most iconic monument of ancient Commagene, and a landmark clearly visible from nearly all parts of the kingdom, is the giant tumulus built by king Antiochus of Commagene on top of Mount Nemrut. The tumulus, built on top of the highest peak in the Kingdom (also the highest in Northern Mesopotamia), at an altitude of 2,150 meters, has a diameter of 150 meters reaching an height of about 50 meters.

Amidst a majestic natural scenery of incomparable beauty, the tumulus consists of a large central mound surrounded by three monumental terraces bearing the colossal statues of King Antiochus and the twelve Gods of Commagene.  The giant statues, which were over 9 meters high, are now mostly broken into pieces and decapitated by lightning.

On the back of each statue, king Antiochus had its testament written in Greek. Antiochus himself was portrayed sitting amidst the Gods,  crowned by a priestly headdress  in the place normally occupied by Hermes-Mercurius. Other reliefs portray various scenes of Deixiosis, that is king Antiochus shaking hands with the Gods, including Mithra-Helios, Hercules-Artagnes, Zeus-Horomasde.

The 200 line testament, which is the longest Greek inscription ever found at any ancient site, points clearly at Antiochus tomb being located within the tumulus. As of today, however, no attempt has ever been made at locating the tomb under the 50 meters high burial mound.

The testament of Antiochus contains both a dedication of the monument to the Gods of Commagene, of Greece and Persia, instructions for the cult and the sacred rites to be celebrated in his honor and in honor of the Gods, as well as a curse to all those who will not abide to this sacred law. Here is an extract from the testament of Antiochus:

“…so I chose to make this holy place a common consecrated seat of all the gods; so that not only the heroic company of my ancestors, whom you behold before you, might be set up here by my pious devotion, but also that the divine representation of the manifest deities might be consecrated on the holy hill and that his place might likewise not be lacking in witness to my piety.”

“Nor shall anyone go unpunished who shall devise in his mind against our honor some other scheme of violence or of disparaging or suspending the sacrifices and festal assemblies which I have established. Whoever shall presume to rescind or to injure or guilefully to misinterpret the just tenor of this regulation or the heroic honors which an immortal judgment has sanctioned, him the wrath of the daemons and of all the gods shall pursue, both himself and his descendants, irreconcilably, with every kind of punishment.”

“A noble example of piety, which it is a matter of sacred duty to offer to gods and ancestors, I have set before the eyes of my children and grandchildren, as through many other, so too through this work; and I believe that they will emulate this fair example by continually increasing the honors appropriate to their line and, like me, in their riper years adding greatly to their personal fame.”

“For those who do so I pray that all the ancestral gods, from Persia and Macedonia and from the native hearth of Kommagene, may continue to be gracious to them in all clemency. And whoever, in the long time to come, takes over this reign as king or dynast, may he, if he observes this law and guards my honor, enjoy, through my intercession, the favor of the deified ancestors and all the gods. But if he, in his folly of mind, undertakes measures contrary to the honor of the gods, may he, even without my curse, suffer the full wrath of the gods.”

[You can read the full text of the Testament of Antiochus (as well as finding the latest excavation and restoration reports) on the website of the Nemrud Foundation: http://nemrud.nl/index.php/tourist-information/the-nomos/]

The tumulus was dedicated on July, 7th of 62 AD, as portrayed on the famous “Lion Horoscope” decorating the Western terrace.

The complex arrangement of terraces and altars likely reflects Antiochus’ belief in the afterlife amidst the Gods (on the Eastern terrace), and his priestly initiation (on the Western terrace, which was as such devoted to the most secret and mysterious rites)