The Necropoleis and Walls of Pompeii

The avenue that from Porta Ercolano leads to the Villa of the Mysteries may be rightfully called a veritable Avenue of Tombs [Via dei Sepolcri]. On both sides outside the gate, the consular road is flanked by tombs and funerary monuments, as it was customary outside of Roman cities (Roman law did not allow the burial of the dead within the city walls, therefore cemeteries had to be built outside, with the largest and richest tombs located in prominent position along the main ways leading in and out of town).  The Via dei Sepolcri is perhaps the most famous of the cemeteries that are found outside the walls of Pompeii. The necropolis of Porta Nola, Porta Nocera and Porta Vesuvio are also notable for their carefully arranged funerary monuments. The tombs are an authentic “Who was Who?” of ancient Pompeii.  Here is found the tomb of Naevoleia Tyche and his husband, Caius Munatius Faustus, a priest of the deified Emperor Augustus (Augustalis), who had likely made his fortune through commerce as suggested by the beautiful bas-relief of a trading vessel that decorates the side of the monument. Here are also the tombs of Umbricius Scaurus, who organized gladiatorial games in the amphitheater; Marcus Porcius, who dedicated the Odeion (Theatrum Tectum) and the amphitheater (Spectacula); and the priestess Mammia, to whom an inscription attributes the dedication of the temple of Augustus in the Forum. Outside Porta Nocera we can find the tomb of the Priestess Eumachia, undoubtedly one of the wealthiest and most powerful women in Pompeii, who dedicated the building named after her in the Forum, in addition to several statues of the Emperors Tiberius and Augustus. An interesting inscription not far from her tomb, on what must have been a major highway leading into town, sheds an interesting light into some very ancient Italian malpractices. The inscription was commissioned by a certain, Titus Suedius Clemens, a tribune, and reads “EX AUCTORITATE IMP CAESARIS VESPASIANI AVG LOCA PVBLICA, A PRIVATIS POSSESSA T SVEDIUS CLEMENS TRIBVNVS CAVSIS COGNITIS ET MENSVRIS FACTIS REI PUBLICAE POMPEIANORVM RESTITVIT”, meaning “By virtue of authority conferred upon him by the Emperor Vespasian Caesar Augustus, Titus Suedius Clemens, tribune, having investigated the facts and taken measurements, restored to the citizens of Pompeii public places illegally appropriated by private persons”.  Already in 79 AD Italy private abuse was quite widespread if it took the authority of the Emperor to restore public ownership of communal land.

Not less interesting, outside of Porta Vesuvio, is the Tomb of Vestorius Priscus. The man, who died at the age of 22, held the office of Aedile, which was a minor city magistrate in charge of the construction and maintenance of public buildings. Among the several painted scenes that decorate the tomb, three are particularly notable. The first one shows the deceased, Vestorius Priscus, in his office of magistrate facing an audience. The second shows a remarkable still life of silver vessels, carefully laid on a table. These include beautiful inlaid cups, plates, saucers and spoons. It is the third scene, however, which is perhaps the most interesting: it shows a pair of fighting gladiators, wearing the weapons of the thraex and the hoplomachus. The winner is standing, while his opponent lies to the ground still holding to his shield. Quite interestingly, both gladiators seem to be wearing a very fine tunic made of a translucent material similar to silk. The fresco is thought to memorialize a munus offered by Vestorius Priscus in the amphitheater of Pompeii when he was an Aedile. 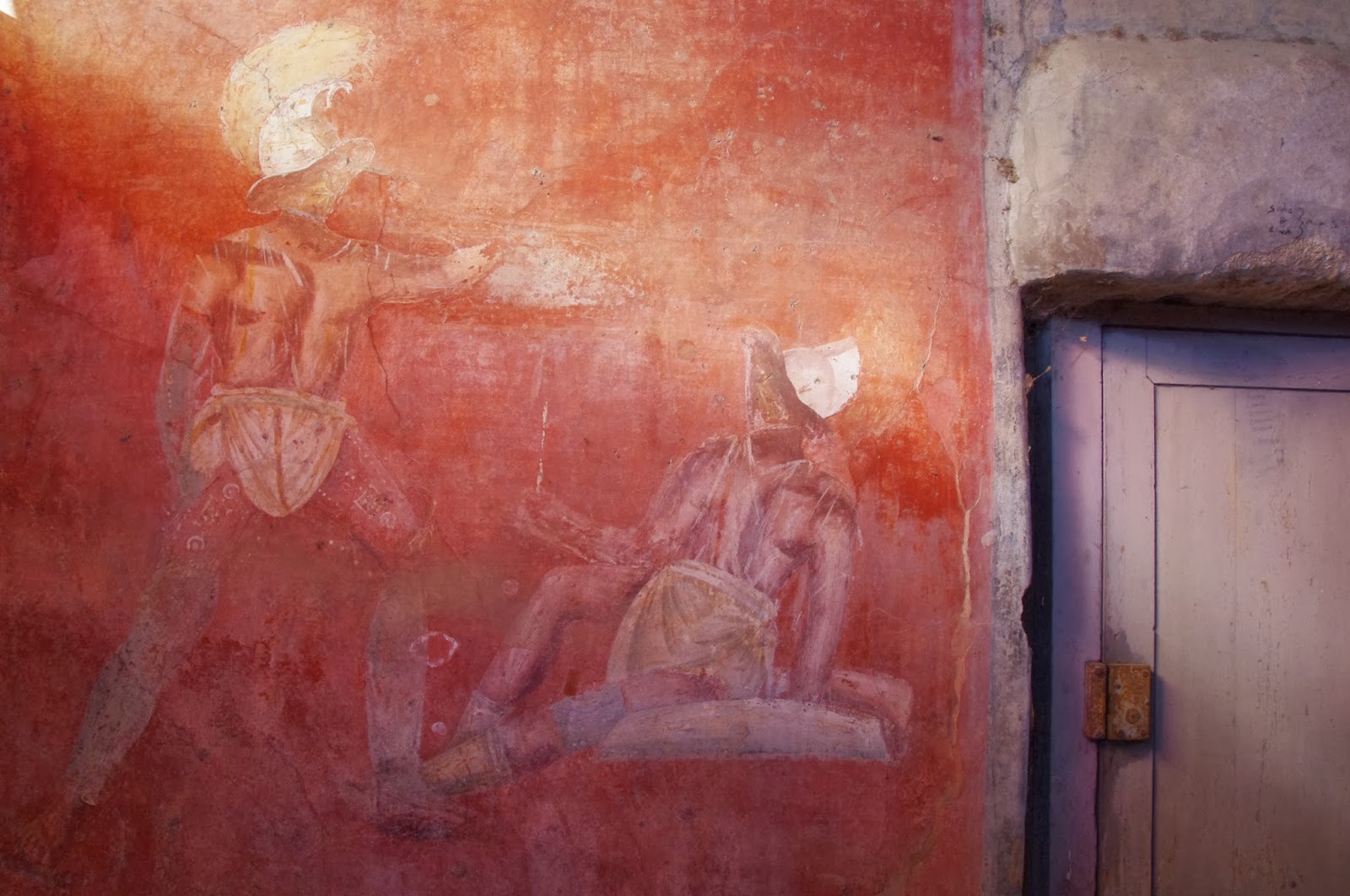 The Walls of Pompeii are perhaps its most overlooked monument. The walls are over 3 Km in length, pierced by 7 gates and protected by towers, of which the Tower of Mercury is perhaps the most famous. The walls bear all the signs of a protracted siege by the troops of Sulla during the Roman civil war. The walls, whose construction probably dates to the Samnitic period, are built of large volcanic tufa blocks, and were later elevated with the addition of towers when Pompeii became a Roman colony. The surviving towers were as much as 3-Storeys high, with arched windows for artillery. Several graffiti and quarry marks can still be found on many of the stones that compose the walls. 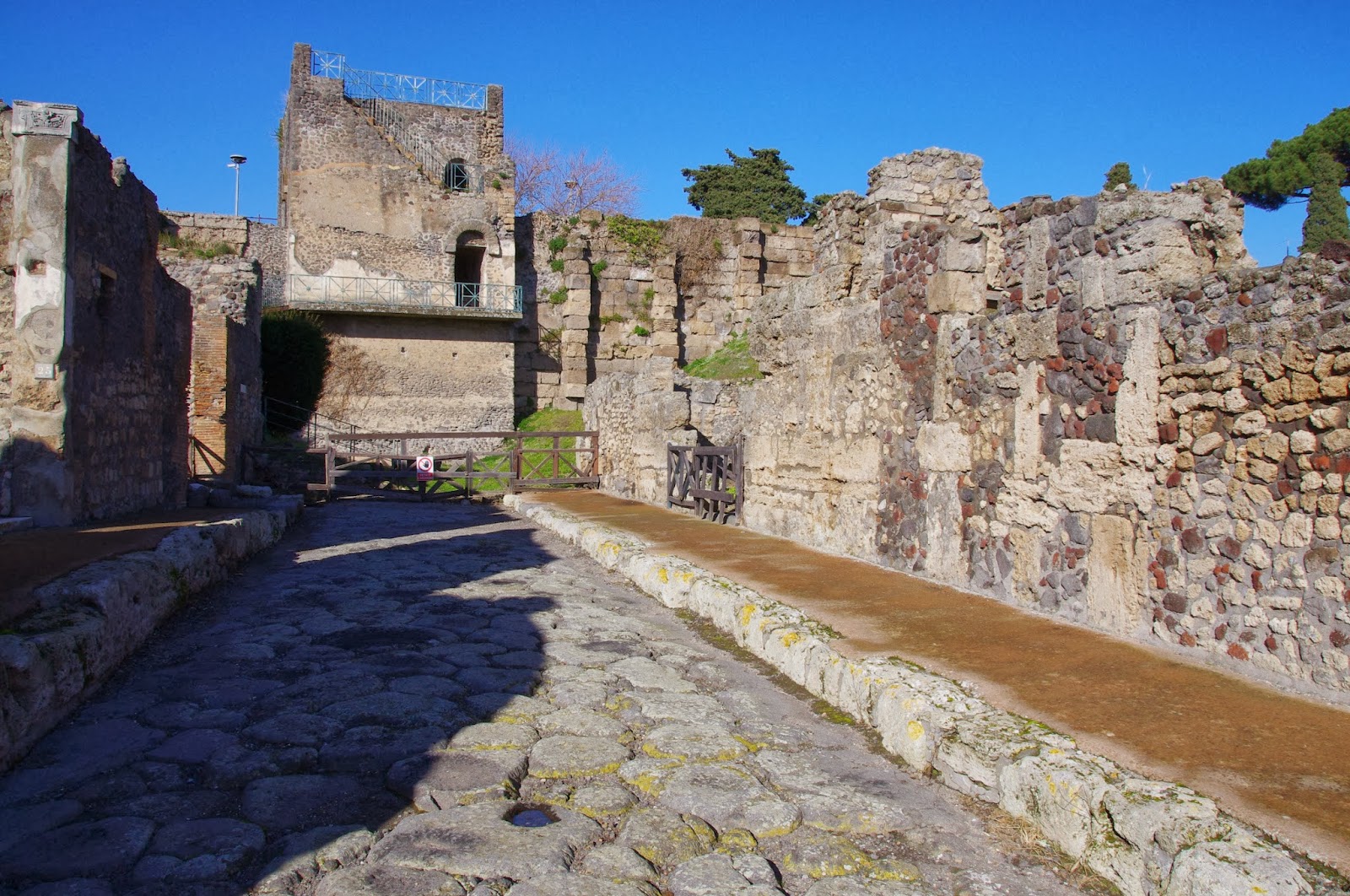