Pompeii 79 AD - The Ghosts of Vesuvius

The Mystery of a City Frozen in Time

Pompeii is a place like no other in the world. It provides the unique chance to see and walk around the streets of a city of the ancient world exactly as an ancient Roman would have seen it. It provides an exceptional glimpse into the daily life of an ordinary, thriving Roman town, frozen in time in that terrible day of August 79 AD. Under its tomb of volcanic ash, Pompeii never suffered the fate of much of the Roman West: it suffered no decadence, no invasions; no barbarians ever walked its streets with plunder.


Pompeii also strikes us as place far from our idealized view of classical antiquity, it is striking in its modernity and normality. Strange enough for a dead city, it is a place that still breaths with the lives of countless ordinary men and women who perished in the great catastrophe of 79 AD. People whose names we know from inscriptions found in the very houses where they lived as well as in the monuments and buildings of a city that is only exceptional for its fate, but would have looked plainly ordinary or even dull to any 1st Century Roman. The people and lives immortalized by the eruption are not those of great Emperors and military leaders, but of ordinary citizens, which surprise us with the full range of their professions: bakers, storekeepers, artisans and painters, money lenders, soldiers, priests and magistrates.

Yet the art and lavish luxury of Pompeii surprises and fascinates us after almost two thousand years – we can only imagine how shocking this must have been to XVIII and XIX Century travelers whose cities and households would have appalled in front of the wealth of a city destroyed by the fury of Vesuvius. At a time when a vast majority of European population still lived in poverty in cities that lacked even the most basic services and infrastructure, how breathtaking must have been the sight of an entire city buried under the earth that once enjoyed public baths and fountains, running water, metal plumbing and even heating pipes for the winter months. Even today Pompeii is surprising for its modernity, thinking of its people already plagued by traffic to the point of creating dedicated pedestrian zones, the walls littered with electoral posters and advertising, the heated pools and baths, and the stores filled with goods from all corners of the Empire. Yet what is most striking to us is the art of Pompeii. Not a wall or surface was spared some form of decoration, from the excellent frescoes inspired by Greek and Hellenistic painting to the delicate stuccoed ceilings and mosaic floors. In some cases its art is so excellent as to be unrivalled among all surviving testimonies of the ancient or the modern world. In other cases the art is much less refined, to appeal to a more popular taste, but always skillful and mature.  As we move between the rooms of the mansions that once belonged to the Pompeian elite, the feeling is that of walking the alleys of a museum or an art gallery, yet the skeletons and body casts are always there to remind us that real people once lived there. Because Pompeii strikes us with its human tragedy nearly as much as it does with its art. Everywhere are the reminders of the immense disaster that struck the city. Preserved in casts and molds are the shapes of the objects of their everyday life, ordinary pieces of furniture, window blinds, doors and frames, as well as the bodies of the people who perished on that fiery night of 79 AD. We may attempt to reconstruct some of their stories from fragments frozen in time: those who were caught by the eruption inside their homes, where they had taken shelter, or in the streets and alleys, killed by the deadly pyroclastic flow, often holding to their children or their beloved ones for fear of losing them in the dark.

These are just fragments from a city frozen in time...

Almost every visit to Pompeii starts from the Forum, the main square and the very heart of the city life. The Forum square must have been beautiful, with its fine paving and exquisite marble colonnades. The Forum would have been bustling with activity, and a major renovation was underway after the devastating earthquake that had struck the city only a few years earlier, in 64 AD. Undoubtedly many people must have fled the city after the continuous earthquakes that had preceded the eruption, but many more had decided to stay and were actively engaged in embellishing their town with new buildings and decorations. New statues were being erected in the Forum, and the great basilica and the Capitolium had been freshly renovated. The precious marble and bronze undoubtedly attracted looters even in the immediate aftermath of the eruption, as certainly the highest parts of the buildings would have emerged from the layer of ash – as much as 5 to 7 meters thick – that had covered much of the city at this point. So it happened that many of the marble columns and even some of the paving slabs were plundered and carried away. A building to the right of the Capitolium served as the market for Pompeii. There several bodies were found trapped under the thick ash and pumice.

The Baths of the Forum

This elegant thermal complex was built immediately behind the Capitolium, and occupied a whole block with its exquisite vaulted rooms and open courtyard. The apodyterium and the frigidarium are stunning with their stuccoed decoration and the marble basins, where one can still perceive a trace of the original coloring of the walls and ceiling. This is only one of several thermal complexes discovered at Pompeii, both public and private, that also include the Stabian Baths, the Sub-urban Baths near Porta Marina and the Central Baths. All baths had large steam rooms, cold and heated pools, as well as outside courtyards for physical exercises. However, nowhere is the decoration more exquisite that in the Forum Baths.

The “Great Theater” and the “Odeion”

Pompeii also possessed its own theater district. It contained a large theatre with a capacity of as much as 5,000 seats and a smaller theater or Odeion (also called a Theatrum Tectum, that is a covered theatre), which also likely served as the city’s bouleouterion, or a place of assembly for the city’s senate. Even though both theatres have been stripped of their original marble seating, columns and decoration, one can still appreciate the disposition of the seats, part of the scaenae frons and even the supports for the masts that once held the velarium that once protected the spectators from rain or the heat of the day. Of the two, the Odeion is the most beautifully preserved, with its colored marble floor and the atlas statues on the balustrade.

The Temple of Isis

Immediately behind the Great Theater was the temple of Isis, undoubtedly one of the most important sacred structures in the whole city and certainly one of the oldest of its kind in the European Continent. Not much remains of the beautiful frescoes (many of which are now in the National Museum in Naples) that provoked the admiration of its first excavators. Yet what is left of the stuccoed decoration is enough to imagine how this shrine would have looked like in its heyday, with robed priests dressed in the Egyptian manner walking its steps and burning incense in front of the statues of the Goddess and the sacred barge. A curious inscription on the entranceway celebrates the restoration of this temple after the earthquake of 64 AD by a certain Popidius Celsinus. “AEDEM ISIDIS TERRAEMOTV CONLAPSAM A FVNDAMENTO P.S. RESTITVIT”, as reads the inscription, whose original is now in the Museum of Naples. 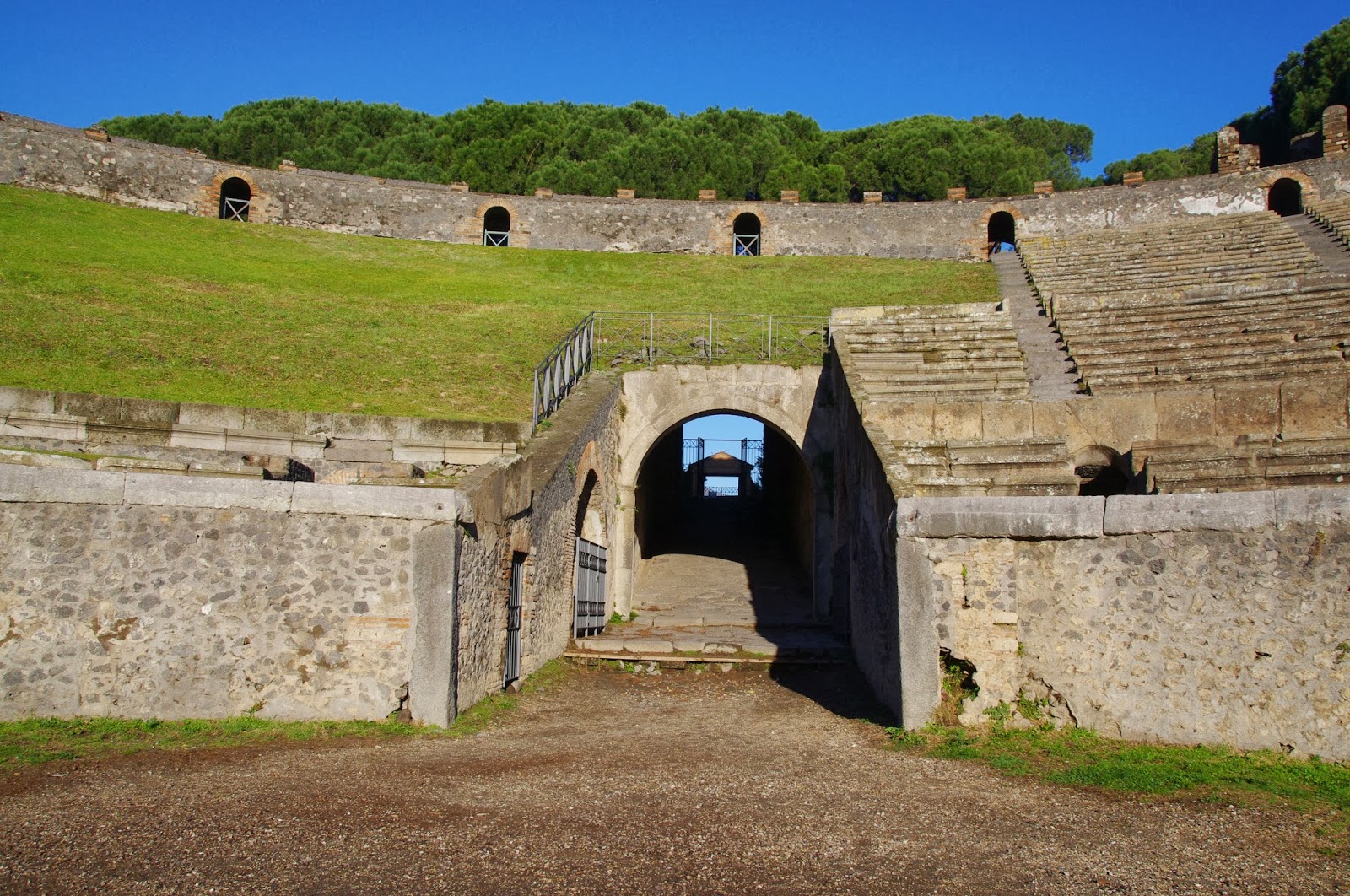 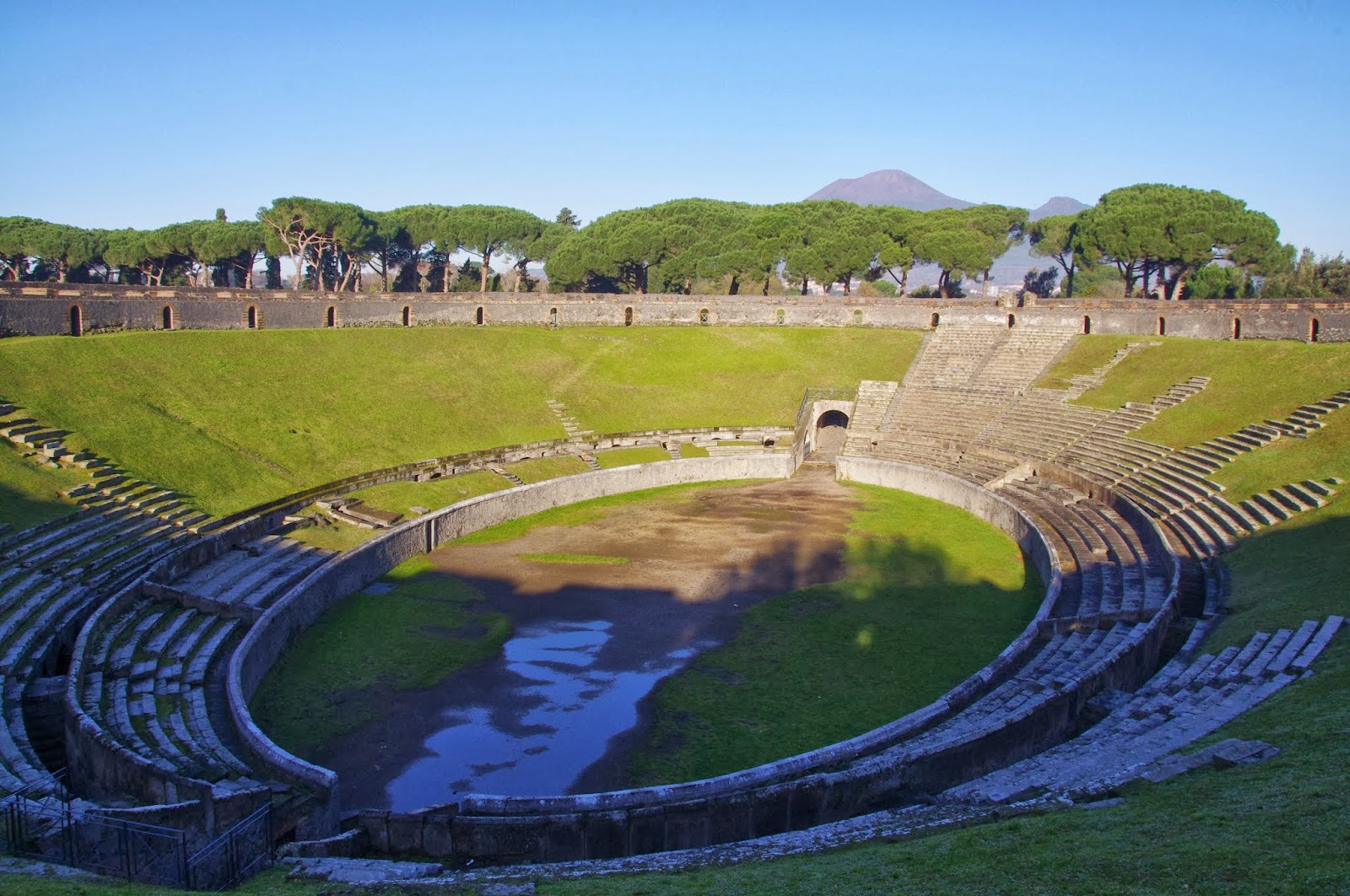 Together with the Forum and the Capitolium, the Amphitheater was undoubtedly one of the most distinctive features of a Roman town. The Amphitheater of Pompeii, one of the earliest in Campania, still preserves much of its original seating and balustrades intact. However, nothing remains of the beautiful frescoes that once decorated the walls of the Podium, depicting gladiatorial fights and hunting scenes: they survived the eruption and the passing of almost 18 Centuries, but finally perished to a single night of frost shortly after careful drawings were taken of them. The amphitheater has no substructure and spectators could only access their seats through stairs located on the outside. However, a service corridor exists around the arena. Both gates, the porta triumphalis and the porta libitinensis are beautifully preserved: from there gladiators entered and exited the arena. In Pompeii was found one of the most extensive collections of gladiatorial weapons and armor, including gladiator helms, shields, daggers and arm and tight protections. The passion and interest for the games was certainly widespread at Pompeii as in much of the Roman World, as it is abundantly testified by the wealth of graffiti depicting the champions of the arena which are found everywhere in Pompeii. The amphitheater was also the stage of a bloody riot in 53 AD between the citizens of Pompeii and nearby Nuceria, which left countless dead and caused the Emperor Nero to order the closure of the Pompeian amphitheater for 10 years as a punishment to the city. This infamous riot is also portrait in a famous fresco from the house of the Gladiator Actius Anicetus (now in the National Museum in Naples), with all the freshness of Roman popular art. Several were also the magistrates who organized gladiatorial games to win the public favor for an election, as is testified by the now lost stuccoed reliefs that once decorated the tomb of Umbricius Scaurus – of which only the XIX Century drawings remain - and by the almost life-size gladiator paintings in the beautifully preserved tomb of Vestorius Priscus outside of the Vesuvius Gate.

Pompeii also certainly had a ludus, which is a gladiator school, and gladiatorial barracks, where a majority of gladiator weapons and armor were found. A House in the Northern portion of the city (so called Caserma dei Gladiatori) was certainly converted, perhaps after the earthquake of 64 AD, into such a ludus, a fact which is confirmed by the several hunting scenes decorating the courtyard balustrade and by the small rooms to the sides of it, which were converted into cubicles or living quarters for the gladiators of the school.
Posted by Marco M. Vigato at 6:02 PM