Angkor, The city of the Celestial Dragon (Part II)

“Shall one add Angkor to the list? It has five gates, and to each of them leads a road, bridging over the water ditch that surrounds the whole place. Each of these roads is bordered by a row of huge stone figures, 108 per avenue, 54 on each side, altogether 540 statues of Deva and Asura. And each row carries a huge naga serpent with nine heads. Only, they do not "carry" that serpent, they are shown to "pull" it, which indicates that these 540 statues are churning the Milky Ocean, represented (poorly, indeed) by the water ditch, using Mount Mandara as a churning staff, and Vasuki, the prince of the Nagas, as their drilling rope. The whole of Angkor thus turns out to be a colossal model set up for "alternative motion" with true Hindu fantasy and incongruousness to counter the idea of a continuous one-way Precession from west to east.”
[G. De Santillana, H. Von Dechend, Hamlet’s Mill (1969), p. 163]

According to Hancock (quoting from Santillana and Von Dechend’s masterpiece book Hamlet’s Mill), the whole city of Angkor was built as a colossal diagram of precession to embed specific astronomical numbers and constants.  One of these “cosmological myths” portrayed at Angkor is the famous Churning of the Sea of Milk. It covers a bas-relief almost 50 meters long inside Angkor Wat’s eastern gallery. 92 Deva and 88 Asura (for a total of 180 figures) pull the serpent Vasuki for one thousand years around Mount Mandara, which serves as the axis of the World and (according to Santillana and Von Dechend), the ecliptic North Pole around which the constellations revolve as a consequence of precession.  More recently, the Angkor expert Eleanor Mannikka has pointed out that even the division in 92 Deva and 88 Asura very accurately marks the number of days between the Winter solstice and the Spring equinox in March and the number of days between the Summer solstice and the equinox respectively. Also, the whole of Angkor Wat would have functioned as a giant calendrical clock, providing a 3-days warning of the Spring Equinox: An observer along the Western causeway would have seen the sun rising exactly on top of the central tower of Angkor Wat on each of the 3 days preceding the Equinox and then on the Equinox day from a different position moved more towards the center of the platform. Similarly, the lateral towers of the Western gateway would have served as solstitial markers for an observer located right outside the bridge main entrance.
While this can certainly be no coincidence, the ancient builders of Angkor Wat also embedded a wealth of astronomical information in the main dimensions of their temples. First of all, as Mannikka observes, the main axial measurements of the temple as taken from the moat and along the western causeway yield, with almost exact precision, the values of the Hindu cosmological cycles of 432,000; 864,000; 1,296,000; 1,728,000 years (here expressed in Khmer cubits of 43.54 cm). Also, the sum of the lengths of the axes of the perimetral wall of Angkor Wat (divided by 12) yields a length of 365.24 cubits, which is the same as the length in days of the solar year. The same figure for the outer encircling wall (divided by 24, as the number of lunar half-phases in one year) yields 354.36 cubits, which is the length (in days) of the lunar year. [3]
According to another scholar, the historian and mathematician Shubash Kak, Angkor Wat consists of at least three astronomical and architectural units which are part of single giant cosmic diagram [4]:

1. The central sanctuary (that is Mount Meru), symbolizing the celestial North Pole, the Earth axis and the spring Equinox
2.  The outer corridors and concentric galleries, which symbolize the ecliptic and the Earth’s and planetary orbits, the cycles of the moon, the constellations and the solar and lunar years
3.    The four axes of the temples, which represent the cosmic ages and the cycles of time.

The most strikingly astronomic monument is however located a mere hundred meters from Angkor Wat, on the mountain Phnom Bakheng. It is a 5-tiered pyramid, 76 meters wide at its base, surmounted by 4 towers and a central sanctuary. A total of 104 smaller towers stand on the lower terraces, which add up to 108 once the 4 towers on the top are added. This makes 27 towers on each side, the same as the number of days in a lunar month. In turn, the lateral towers and the central sanctuary mark the position of the Sun at the two Solstices and at the Equinox. Of the 60 towers that stand on the upper 5 terraces, there are 12 on each terrace, the same as the number of years in the Jupiter cycle, considered the base of the Khmer sacred calendar. Not surprisingly Phnom Bakheng has been described as an astronomic calendar in stone. But the same may be said of other famous Angkor monuments, such as the Bayon, with its 54 towers, and the Pre Rup, which also contains a total of 27 towers.

Moving further into the field of Earth-Sky analogies, independent researchers Jean-Pierre Lacroix and Robert Bywater believe they have found proof of gigantic planetary diagrams on the ground of Angkor, modeled after ancient Hindu astronomic systems.  The theory of Lacroix and Bywater is too complex to be treated in sufficient detail (a more detailed explanation, complete with figures and diagrams, may be found on their own website http://ancientcartography.net/), so only the outline will be given here. As the two authors carefully explain on their website, they believe to have developed “a theory about the relationship between the locations of the principal Khmer monuments (and in many instances their orientation and internal measurements) and components of enormous Indian planetary diagrams “drawn virtually” on the Angkorian ground using the parameters of the “Midnight System”.
The “midnight system” is in fact one of two geocentric models proposed by the Hindu astronomer and mathematician Aryabhata in the early 6th Century AD. The model allows to predict with a high degree of accuracy the exact position of the inner and outer planets (including that of the Sun and the Moon) on a specific date, based on the intersection of a circle called deferent (centered on the observer) and a combination of two epicycles called Manda and Sighra. The two authors believe they have found proof of the knowledge of the “midnight system” by the ancient Khmer in an inscription from the temple of Banteay Srei referring to the position of the planets during a highly significant planetary alignment that was recorded by Khmer astronomers on the midnight of April 22nd, 967 AD. On that date the planets were clustered around the same portion of the night sky within the Pisces constellation as they were at the beginning of the Kali Yuga – the last cycle in Hindu cosmology – which supposedly began on February 17th, 3,102 BC.  The origin of this planetary model may indeed be extremely ancient, as it is found already in pre-Vedic inscriptions and astronomical recordings from the Harappan culture at Harappa and Mohenjo-Daro.

The ancient Khmer, however, did not clearly limit themselves to recording astronomical dates, but wanted to portray them through colossal diagrams on the ground as part of their own sacred geography. Astonishingly, Lacroix and Bywater believe that “The Khmer kings moved their successive capitals across Cambodia for various political reasons, but we suggest they wanted also, in some cases, to obey the rules of sacred geography related to planetary diagrams or, conversely, to use a new location to create or complete a planetary diagram”; thus providing an explanation for the unexpected surge in building activity that characterized the beginning of the Khmer empire. According to the two authors, this set of planetary diagrams that covered the whole of the ancient Khmer empire, were brought to light by temples built on key locations, which in turn “reveals capacities, in the fields of astronomy, land-surveying and cartography, which exceed by far the know-how and accuracy previously attributed to Middle-Age scholars”.

By establishing their prime meridian across the sacred mountain of Phnom Bakheng, the ancient Khmer were able to carry out a comprehensive survey of their vast empire, locating cities and monuments according to a celestial design. As an example, the two authors cite the anomalous orientation of the ancient site of Preah Khan of Kampong Svay, which is oriented 28° East from true North. This is along the same orientation of a line connecting the center of the Sighra epicycle used to describe the position of Saturn with an imaginary observer located on the hill of Phnom Bok nearby Angkor. Also, when measurements are taken using the krta yuga of 752.46 meters as the ancient Khmer land surveying unit, the distances between the neighboring as well as the more distant sites surprisingly yield exact integer numbers which are multiples of the main planetary dimensions and the measures of the epicycles. [CONTINUED IN PART III] 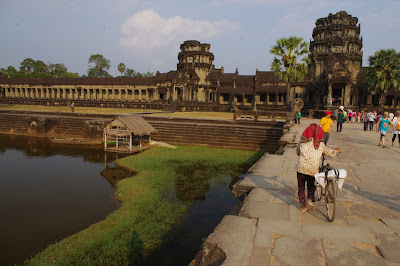 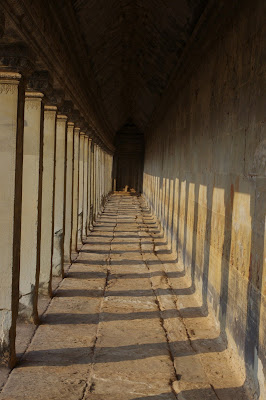 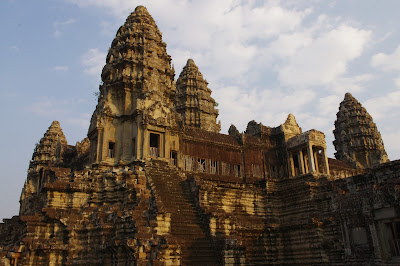