Angkor, The city of the Celestial Dragon (part I)

Angkor, The city of the Celestial Dragon


Angkor, the capital of the great Khmer Empire between the 9th and the 14th Century AD, was the largest city in the World of its time with a population of over one million people. For a long time pictured as the heart of darkness in one of the 20th Century’s most gruesome genocides, its ruins have only since a few decades resurfaced from their jungle tomb in remote Cambodia as one of the world’s premiere tourist destinations.
The ruins of Angkor cover an area of more than 600 Km2, a city the size of Los Angeles, larger than New York or London, on the northern shores of Lake Tonle Sap, in what is nowadays Cambodia. Over a span of slightly more than three centuries, over 700 temples were built within its walls, ranging from mere brick towers to gigantic sandstone pyramids.
Ever since its re-discovery by the Europeans in the 19th Century, Angkor has become the archetype of the lost city, with gigantic threes looming sinisterly from crumbling walls and cavernous temples. In fact, Angkor was never lost and continued to remain an active site of pilgrimage for the local Buddhist population even centuries after its collapse in the mid-14th Century. It is true however that while a few of the major temples remained vital throughout the Centuries; the vast majority of the ancient city was soon reconquered by Nature and vegetation, turning much of it into a dilapidated ruin.  All in all, Angkor teaches a very interesting lesson on how quickly nature can claim the works of man.

Angkor was forgotten – at least to the West – and even the Khmers themselves (or their descendants), plunged into a state of barbarism through conquest and an impoverished agriculture, seemed to retain little if no memory of the city or its builders. Very much to the entertainment of European travelers, they claimed the ruins had been built by Angels or by a race of giants in a single night. Yet the great Khmer empire was no civilization of antiquity: Angkor flourished at the same time as the European cathedrals and the remnants of its once glorious civilization extended very much into Renaissance.

The beginnings of Angkor are no less mysterious. A stele from Ak Yum, near the Western Baray, bears an inscription with a date of 713 AD by a certain Queen Jayadevi, the earliest ever found. Very little is known of the history – let alone the prehistory – of Angkor before its first great king, Jayavarman II, about 802 AD. After spending much of his early life in the company of a mysterious and powerful monarch known in Khmer inscriptions as the “King of the Mountain”, who probably ruled from Java, Jayavarman II founded the cult of the Deva-Raja (God-King or King of the Gods) and proclaimed himself without much modesty Chakravartin, that is “King of the World”, through a rather obscure magical ritual performed on the sacred mountain of Phnom Kulen, some 50 Km north-East of Angkor.
Before settling in what was to become their greatest city at Angkor, the Khmers founded several ephemeral capitals, all within 100 Km from Angkor, as if looking for an ideal site where to establish their capital. The first of those cities was on the Kulen mountains. From there the capital was transferred at Indrapura (whose exact whereabouts are unknown), and then in a new city called Hariharalaya (present day Roluos). The successors of Jayavarman II established new cities at Yasodharapura, the first city of Angkor, centered around the holy mountain Phnom Bakheng, and at Koh ker under Jayavarman IV.
At the beginning of the 13th Century, the Khmer capital of Angkor Thom was surrounded by an impressive moat running over 100 meters wide along the 9 Km walls. Two giant reservoirs, as much as 8 by 2 Km wide, called Baray, were dug to the East and West of Angkor Thom. To the South stood the equally impressive Angkor Wat, built by Suryavarman II as a model depiction of Mount Meru, a temple that claimed to be the largest single religious building on Earth.

An hypothesis that sparkled much interest over the last decade was proposed by Graham Hancock and John Grigsby (then a Ph.D. student working for Hancock on his book “Heaven’s Mirror”) in their stellar correlation theory with the constellation Draco [1]. According to Hancock and Grigsby, over 15 of Angkor’s pyramids and temples aligned with remarkable accuracy to stars in the constellation Draco, while significant stars from neighboring constellations such as Cygnus and Corona Borealis were also marked on the ground. What was perhaps even the more surprising was that the diagram drawn on the ground of Angkor appeared as if turned “upside-down” with respect to its celestial counterpart in Heaven. Hancock and Grigsby estimated this could be due to precession and that a perfect alignment with the stars of Draco in the right position would have only occurred before dawn on the spring Equinox around 10,450 BC; when Draco was at its lowest culmination at Angkor. Interestingly, the great temple-pyramid of Angkor Thom, the Bayon, placed exactly in the center of the Khmer capital and acting as the mythical omphalos or navel of the Khmer empire, would have taken the position of the ecliptic North Pole in Hancock’s celestial diagram. [Continued in Part 2] 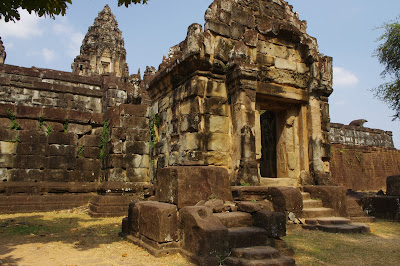 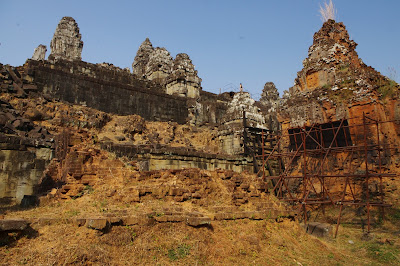 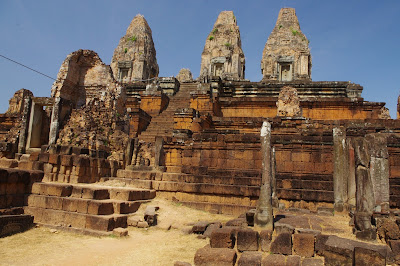 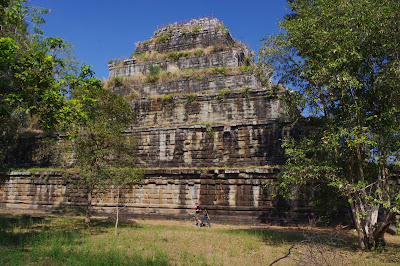 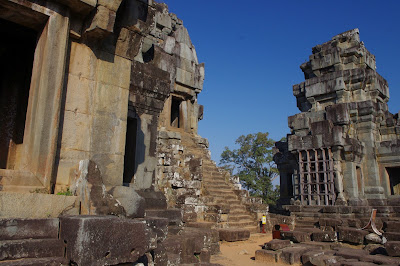 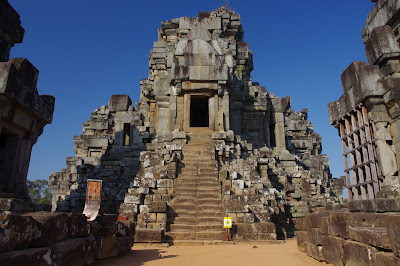 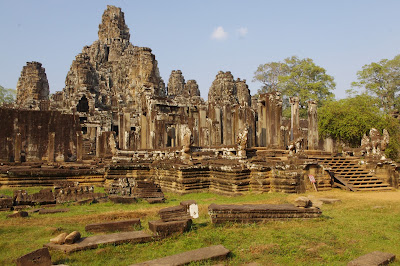 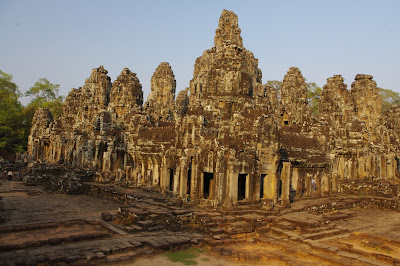