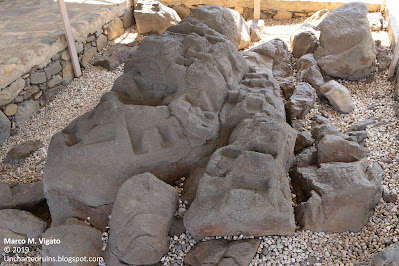 A small site in the southern part of the state of Mexico, virtually unknown until it was only partially excavated in the early 1990’s, may hold the evidence of an unknown civilization that flourished at the same time as the mysterious Olmecs and left some incredible stone monuments that have no equals in other parts of Mexico and Mesoamerica.

The small archaeological site of San Miguel Ixtapan is located in the south of the State of Mexico, at the entrance of the Tierra Caliente region that from the highlands of Central Mexico leads down to the Pacific coast. One gets there from the city of Toluca on highway 134 after passing the town of Tejupilco de Hidalgo, or from the popular lake resort town of Valle de Bravo, from which it is only about 70 kilometers (45 miles) distant.

The site is only one of a handful that has been at least partially explored in the southwestern part of the State of Mexico, an otherwise blank spot on the archaeological map of Mexico. Its discovery only dates to 1985, when a huge sculptured “maqueta” model stone was uncovered by farmers plowing a field near the local cemetery. It was not until 1995 that a small portion of the site, including parts of a large pyramid and a Mesoamerican ball court – only one of three known in this part of Mexico – were excavated.

The earliest traces of human occupation in the area date back at least 12,000 years, in the form of cave paintings in the nearby Sierra de Nanchititla. An unknown culture then occupied the site around 2,000 BCE. To this remote period dates a human burial found on top of a still unexcavated pyramid mound or platform, which contained a mosaic stone mask, another smaller mask made of jadeite with Olmecoid features, and a jade beads necklace, together with human remains that provided a chronological reference date for the burial (Sinaí Gomez, 2012).Since the time of the site’s discovery, several subsequent excavation campaigns have revealed at least five different periods of occupation of the site during the Formative, Pre-Classic, Classic, Epi-Classic and Post-Classic period.

Several Formative period ceramic figurines were also found, dating to between 800 and 200 BCE, showing affinities with the Tlapacoya and Tlatilco artistic tradition of Central Mexico. The discovery of a number of Teotihuacan style artefacts further testify to the site’s occupation during the Classic period, when it either came under direct political control or was influenced by Teotihuacan. After the fall of Teotihuacan, in what is known as the Epi-Classic period (750-900 AD), the site knew its greatest expansion, with the construction of several monumental structures and pyramids rivaling in size other nearby sites like Teotenango and Xochicalco.

After a period of abandonment, the site was then reoccupied by the Aztecs in the Post-Classic period, and remained inhabited until the time of the Spanish conquest.

The site nowadays consists of a large pyramidal platform with a temple and smaller rooms on top in which several sculptures were found, a Mesoamerican ball court, a monumental stairway built of large basalt blocks, and a sunken courtyard. Some very notable sculptures were found in niches and chambers of the main pyramid (also known as Basement 3), including a large stela with a depiction of the rain god Tlaloc, and multiple anthropomorphic figures with unusually crossed arms, a pose quite rare in ancient Mexico and with possible funerary significance.

The site is also home to a small but very interesting site museum containing a wealth of objects found during the early 1990’s excavations, including ceramics, stone and jadeite ornaments, obsidian knives and points, copper and bronze artefacts (including a remarkable necklace with exquisitely worked human heads and figurines made of copper), as well as stone sculptures, votive offerings and a stone ring associated with the ballgame court. The artefacts show a remarkable range of trade interactions and a definite influence from the Mezcala culture of Guerrero and the Balsas river culture. The location of San Miguel Ixtapan was probably considered strategic on account of the presence of salt mines, still in use since prehispanic times, and of large deposits of columnar basalt providing readily available material for construction.

The “Maqueta” stone is a huge carved basalt stone boulder, measuring some 3 by 4 meters. It was this stone, uncovered by farmers plowing a field, which first called archaeologists to the site in 1985. The huge stone is entirely covered in miniature representations of architectural structures believed to represent a city (whether real or imaginary is a matter of speculation), complete with temples, pyramids, at least five ballgame courts, plazas and sunken courtyards, all connected by avenues and stairways. Similar examples of prehispanic architectural models are known to exist from Xochicalco, Morelos; Plazuelas, Guanajuato; Valle de Bravo, Mexico (see our recent article and story here); Teotihuacan (Mexico), as far as Tikal, Guatemala. Among these, the one of San Miguel Ixtapan is possibly the largest and most complex, comparable to the famous Sayhuite stone of Peru.

Several attempts have been made to identify the site depicted on the stone, seemingly a hilltop ceremonial center of exceptional scale and complexity, but these attempts have so far proven entirely fruitless. It is possible that the stone portrays a yet undiscovered site, perhaps located in the mountains to the north and east of San Miguel Ixtapan, or that the city depicted was purely imaginary, a votive representation of an idealized place or sanctuary. It may well be a city that is still lost or the drawing of a city yet to be built.

There are no definite elements for dating the “Maqueta” stone, but archaeologists mostly favor a date in the Epiclassic or early Postclassic period (ca 900-1200 AD).

In the second part of this article we will be discussing some of the other evidence of high-precision megalithic architecture in San Miguel Ixtapan.

We would like to thank archaeologist Victor Osorio Ogarrio, director of the site and archaeological museum of San Miguel Ixtapan for his kind permission to visit the “Recinto de las Esculturas” and for accompanying us on our visit to Rancho “I”.

The opinions expressed in this article are solely the Author’s and do not necessarily reflect the opinions and beliefs of Dr. Osorio, of the National Institute of Anthropology and History (INAH), or of the Secretary of Culture of the State of Mexico.