The Lost City
Rumors of vast ruined cities in the unexplored North of Guatemala, close to the border with Mexico, had been circulating ever since the late 19th Century, when the first cartographic survey of the region led by Engineer Claudio Urrutia reported several ruins and ancient structures located along parallel 17.49° N. Again in the 1930s, the famous aviation pioneer Charles Lindbergh reported having seen strange mounds in the area, rising unnaturally high above the jungle canopy as seen from the air. It was however not until 1962 that a first Harvard expedition, led by archaeologist Ian Graham reached and first mapped the site that would be known as El Mirador. During the ‘80s, several other expeditions followed, mostly led by archaeologist Richard Hansen. These led to the discovery of an entire network of ancient sites that had remained previously unknown and hidden by the jungle: Nakbe, Tintal, La Florida, Wakna, La Muerta, and of course El Mirador. Starting in 2003, several monuments and structures have been cleared of the vegetation and partially excavated in the Mirador basin, which still remains one of the least accessible sites in the World.

Even nowadays, it is a 5 days expedition to reach El Mirador from the small local community of Carmelita, where the winding road from Flores ends into deep jungle. There the road turns into a trail, only accessible on foot or on horseback. Carmelita will be the starting point of our journey into the cradle of Maya civilization. This entire area was already inhabited around 950 BC and was home to some of the largest and most complex Maya city states of the pre-classic period. By 150 AD, it boasted the greatest pyramids in Mesoamerica and possibly the largest urban population in the Western hemisphere, with settlements as large as a modern metropolis. Now it is a country of dirt roads and impenetrable forests.
Other than our party of three (myself, Yuan and Sophie), we will have our guide, Hugo, our cocinera, Doña Marta, a couple of boys for setting up camp and taking care of the mules, and 7 mules to load tents, hammocks and supplies for 5 days, including 2 mules for riding.

Over the years, the local community of Carmelita has organized a regular service of guides to take visitors into the National Park and to the ruins of Mirador. Armed guards and military patrols are stationed along the main trails and close to the border with Mexico, in an area that has a reputation as a major corridor for drugs from Centroamerica and illegal antiquity trafficking.

A large sign welcomes visitor to the 48 Km long trail to El Mirador. After that, the trail crosses some communal farming land before entering the jungle. In the wet season, from October to March, mud and water in some parts of the trail can reach up to the waist as the whole jungle is flooded. Even in the dry season, the entire trail is covered in hardened mud and fallen trees, which make the walk extremely difficult under the tropical heat, where temperatures can reach over 40°C by midday with an almost 90% humidity. The first day requires to walk about 20 Km until the great pre-classic city of Tintal. Our only stop is at a small camp site called El Guanacute, mostly used by local loggers and chicleros as a base for exploring the nearby jungle. In this time of the year the camp is abandoned, with only a few thatch huts left as temporary shelter from the occasional rains. 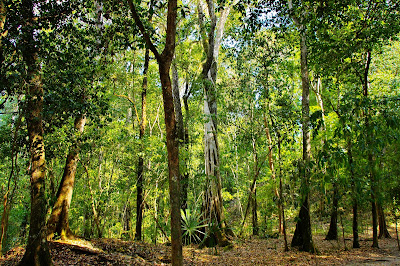 Along the trail, we are stuck by the number of pillaged mounds and structures which fell victim to the looters over the years. By the late afternoon, we finally reach Tintal, our first destination. Our camp for the night consists of a few tents mounted under a thatched roof. By the time we arrive at the camp, our porters have already set up tents and hammocks for the night, and dinner is cooking on the fire. The camp has only very basic facilities; still there is plenty of rainwater for washing and a large kitchen area. A large archaeological map of the site is on display under a thatched roof, together with a few ceramic exhibits and ancient artifacts recovered from the trenches dug into the nearby mounds.

El Tintal was a satellite city to the capital of the Kingdom of Kan, El Mirador. Tintal is the second largest site in the Mirador basin, after Mirador itself. Due to its remote location, Tintal remained virtually unexplored until 2004, when the first comprehensive survey of the site was carried out by the Mirador Basin Project. As most of the ancient sites in the Mirador basin, Tintal was most heavily occupied during the Late Pre-classic period (300 BC – AD 150), and encountered a sudden end at the time of the fall of Mirador by hands of a league of city states led by Teotihuacan in the valley of Mexico, about 150 AD.
The city center encloses an area of some 9 square Km; incuding 850 major structures some of which reaching up to 50 meters high. [1]

The most notable feature is a large, roughly circular ditch surrounding a vast compound called “Complejo Mano de Leon” which includes the central acropolis and the main ceremonial center, along with several smaller pyramidal structures, palaces and a ball court game. The three main pyramids at the site are placed in the shape of an equilateral triangle, some 2 Km apart from each other. The central acropolis is the main triadic structure, consisting of a large pyramid surmounted by three smaller pyramids also placed in a triangular arrangement, usually the central one being the largest of the three. From the top of this pyramid, one can very clearly see the two other great pyramids of Tintal, the pyramid of El Henequen and La Isla.

All of the major pyramids and monumental complexes were once connected by means of raised causeways, which are now heavily overgrown by vegetation. At the time of our visit, the trail to the pyramid of La Isla was so much overgrown as to make impossible to walk the 2-3 Km between there and the Central Acropolis. According to archaeologist Richard Hansen, who now leads the Mirador Basin Project, this triangular arrangement found also at other sites in the Mirador basin was a reflection on the ground of the constellation of Orion, with the three stars of Alnitak, Rigel and Saiph and the great nebula between these stars believed by the Maya to be the “place of origins”, the seat of creation and the navel of the cosmos. 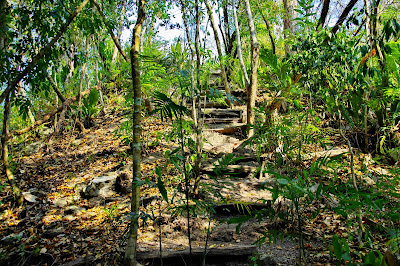 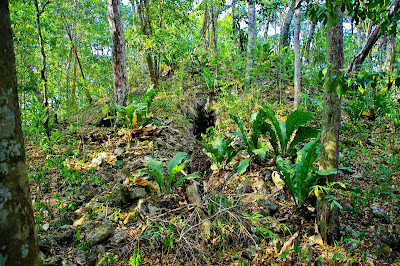 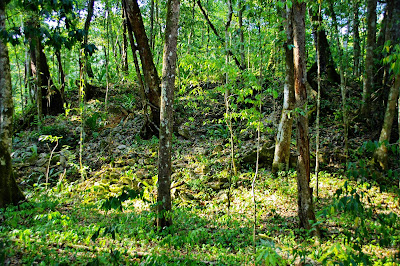 Accompanied by these considerations, we climb the pyramid of El Henequen as we are approaching sunset. The pyramid rises on top of a high raised platform surrounded by smaller mounds and plazas. It was apparently a 4 or 5-tiered structured, but little of the original stonework has been exposed from underneath the soil and vegetation that covers almost all the structure. The flight of wooden steps ends abruptly on top of a small stone platform which can accommodate at most 10 to 15 people. It is doubtful whether a temple ever existed on such a small terrace, which seemed much more fit and suited for astronomical observations. This gives El Henequen the appearance of a giant truncated pyramid, rising steeply in terraces until its missing capstone.

From up there the Central Acropolis and the pyramid of La Isla truly look like islands in the jungle, looming with the mighty appearance of small tree-covered mountains above the prevalently flat landscape. For miles and miles the jungle stretches as far as the eye can see, in all directions. One can only make out in the distance the contours of giant, mighty pyramids at El Mirador and Nakbé; which also describe a cyclopean, roughly equilateral triangle on the ground, with each site some 20-25 Km apart.
The sunset over the jungle is an awe-inspiring sight, as the sky turns yellow and red and the forest comes alive with thousands of birds and the screams of spider and howling monkeys in the trees nearby. 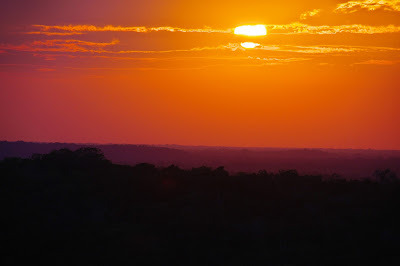 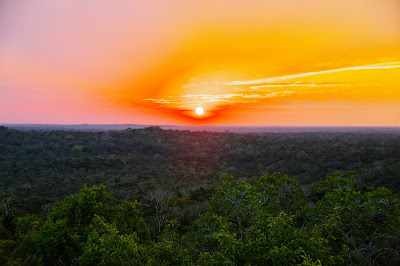