A mysterious Olmec presence in the Mixteca

Huehuepiaxtla is a small town located in the heart of the Mixteca region, 150 kilometers (100 miles) south of Puebla. Overlooking the town is a huge isolated peak, called by locals ‘La Peña’ – The rock. Tradition has it that the mountain was home to the first inhabitants of the region, who were later turned into stone by the gods.
I first became interested in this mysterious site after coming across pictures online of what appeared to be several broken stelas and bas-reliefs [1]. There were also rumors of more extensive ruins near one of the peaks, including great stone walls and a broken obelisk. After contacting the local authorities, the municipal president Dr. Florencio Domínguez was kind enough to arrange for a guide and equipment to climb the peak and document whatever ruins we might find on top.

Upon arriving in Huehuepiaxtla, the summit of the Peña was still entirely shrouded in the morning mist. After the necessary preparations, we approached the cliff from the West. The peak now loomed directly a full 450 meters (1,470 ft) above us and the Rio Mixteco running below. Luckily, no rain had fallen in the past few days, so the rock was quite dry. Florencio explained that had it rained the night or the day before, the rock would have been too slippery to climb. Our guide, German, was an expert climber and one of very few people in town who know the difficult trail to the top.
Already at 10:00 am the temperature was nearly 30°C. Near the base of the cliff, we walked through a large flat area, trapezoidal in shape, which appeared to have been artificially leveled with steep embankments on all sides. Some overgrown mounds on the western side suggested this might have been a ceremonial plaza flanked by pyramids.

The possibility of a connection between these sites is further suggested by the fact that a line drawn through Chimalacatlán and Huaxtla (as described in a previous article [2]) leads directly to the rock of Huehuepiaxtla. A continuation of the same line crosses the nearby rock of Tlaxcuapan and ends at Apoala. This alignment of five sites, all displaying unusual megalithic architecture, appears to be hardly coincidental.
It is only to be hoped that the Mexican Institute of History and Anthropology (INAH) also gathers an interest in this now forgotten site and helps preserve it from looting for the benefit of future generations.
References

Unfortunately, no bibliography could be found concerning Huehuepiaxtla and its ruins, as the site is presently unpublished and no mention of it exists in academic literature.

Also on this blog: The Location of the Mesoamerican ‘Hall of Records’ at Chalcatzingo: http://unchartedruins.blogspot.com/2016/11/the-location-of-mesoamerican-hall-of.html - Note the striking similarity between the profile of the rock of Chalcatzingo and the Peña of Huehuepiaxtla, as if to suggest that these may have in fact been sister sites belonging to the same culture
Pubblicato da Horus Neo Ikon Epifanes a 17:15 1 commento:

Ancient high-technology in the National Museum of Anthropology, Mexico City

The National Museum of Anthropology in Mexico City hosts one of the largest collections of archaeological artefacts and pre-Columbian masterpieces in the world. Among those, are a number of pieces, some extremely famous, others entirely neglected by tourists, that exhibit a level of technical sophistication far beyond the capabilities of the ancient peoples who supposedly realized them.

1. The Aztec Calendar stone
This enormous monolith, weighting an estimated 24 tons, was discovered under the ruins of the Templo Mayor, the greatest temple of the Aztec capital city of Tenochtitlan. The enormous stone must have been dragged by thousands of peoples from quarries located at a distance of over 22 kilometers. It contains three rings or calendar wheels surrounding a central disk containing a depiction of the present Sun and of the four previous Eras or Suns, which ended in cataclysms. The first ring contains 20 glyphs corresponding to the days of the 18 months’ Aztec calendar. A second ring is similarly divided into squares, each containing 5 points, while the outermost ring contains the depiction of entwined fire serpents and more calendrical symbols. With its complicated symbolism and concentric rings or gears, the Aztec Calendar stone appears eerily similar to the petrified version of a mechanical device.
2. The monolith of Coatlinchán
The monolith of Coatlinchán is a colossal ancient statue that for centuries lay abandoned in an andesite quarry near the ancient city of Texcoco, before it was finally moved to Mexico City in 1964. The same andesite quarry is also believed to have provided much of the construction materials for the stone sculptures and megalithic architecture of Teotihuacan, some 25 miles to the North-East of Mexico City. It is believed that the monolith of Coatlinchán is a representation of the Rain-god Tlaloc. It is nearly 7 meters high and weighs an estimated 152 tons, making it the largest ancient statue and one of the largest carved monoliths in all the American continent. The monolith now decorates a fountain in front of the National Museum of Anthropology in downtown Mexico City.

3. Colossal Aztec sculptures
The Aztec room of the National Museum of Anthropology contains a number of colossal Aztec sculptures that once adorned the area of the Templo Mayor. Some of the most impressive ones include a giant crouching jaguar, depictions of the fire serpent or Tochancalqui, and some enormous serpent heads. The Coatlique statue is a particularly striking piece of sculpture depicting the ancient Aztec goddess of snakes, wearing a gown of entwined serpents and a necklace of severed human heads and hearts. From her decapitated head, two great serpents spring out. These statues, each weighting many tons, were carved from the hardest basalt and andesite stone by a people that had allegedly no knowledge of metal tools, and may be ranked among the finest and most striking pieces of sculpture anywhere on earth.
4. Teotihuacan’s ‘Goddess of Water’
This enormous statue popularly known as the ‘Goddess of Water’ was found at Teotihuacan, near the base of the Pyramid of the Moon. The huge andesite statue is over 3.2 meters (10 ft) tall and weighs an estimated 15 tons. It is stylistically similar to the great monolith of Coatlinchán and may have originally formed part of a pair of statues decorating a temple on top of the Pyramid of the Moon.
5. Colossal Olmec stone heads
Over 20 colossal Olmec stone heads are known, most of which from the Mexican states of Veracruz and Tabasco. The two examples that are found in Mexico City’s National Museum of Anthropology come from the ancient Olmec capital of San Lorenzo, Veracruz. Other than for their enormous size (each weighs between 8 and 12 tons), these sculptures are remarkable for their ornate headdresses and negroid features, with slanting, deep-set eyes and high cheek bones, suggesting they may depict individuals of a race different from that of the present inhabitants.
6. Drilled alabaster vases
A unique example of a drilled alabaster stone vase can be found in the Tula room. Discovered in Tula, Hidalgo, this unfinished vessel was carved with the aid of a tubular drill that left peculiar drill marks on the inside. There is no explanation as to how this was achieved by a people that supposedly ignored the use of metals but the material used (a very fine kind of alabaster) and the general workmanship are reminiscent of the finest early Dynastic Egyptian stone vessels.
7. The ‘Monkey Vase’ of Texcoco This small obsidian jar is perhaps one of the most exquisite objects in Mexico City’s National Museum of Anthropology. Made of a single piece of obsidian, it depicts a monkey holding its tail above its head as a kind of handle. It is not known by what means the hard obsidian (a type of black volcanic glass) was finished to achieve a perfect mirror polish without breaking it, nor how it was so precisely carved on the inside with walls just a few millimeters thick. The vessel was discovered in 1880 inside a tomb near the ancient city of Texcoco, but nearly nothing else is known of its provenance.
8. Incredible obsidian and rock-crystal objects
Similar to the Monkey Vase of Texcoco, but on a smaller scale, these ear spools and pendants are also made of obsidian. They are carved to a perfect mirror-like polish, with walls so thin as to be almost transparent. Other examples are known from rock crystal and other extremely hard stones. It is a mystery how this level of workmanship was achieved without the aid of sophisticated metal tools by a people who allegedly ignored even the use of the lathe.

9. Polished basalt statues
The same level of mirror-like finish that is found on the smallest obsidian and jade objects can also be found on some larger basalt statues, like a number of magnificent coiled serpents. These works of art are not only striking for their extremely accurate workmanship, but also for their precise geometry that is almost suggestive of the use of machines or other unknown mechanical methods for cutting and shaping the stone.
10. The Codex Boturini
The mystery of the Codex Boturini lies not in how it was made, but rather in its contents. One of only a handful surviving Aztec codices, it contains a detailed account of the Aztec migration from a mythical place called Aztlan, depicted as a large island surrounded by water. From Aztlan, the Aztecs allegedly came to Mesoamerica, passing through a number of mythical and real historical places. The Codex Boturini has often been claimed to preserve the memory of the Aztec’s ancestral migration from Atlantis. The very name of Aztlan may be translated as the ‘place of whiteness’ or the ‘white island’. The equally legendary Chicomoztoc, the ‘Place of the Seven Caves’, from where the ancestors of the Aztecs emerged to repopulate the earth appears instead as a subsequent step in the Aztecs' migration after their departure from Aztlan. 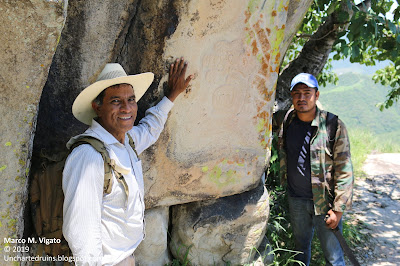